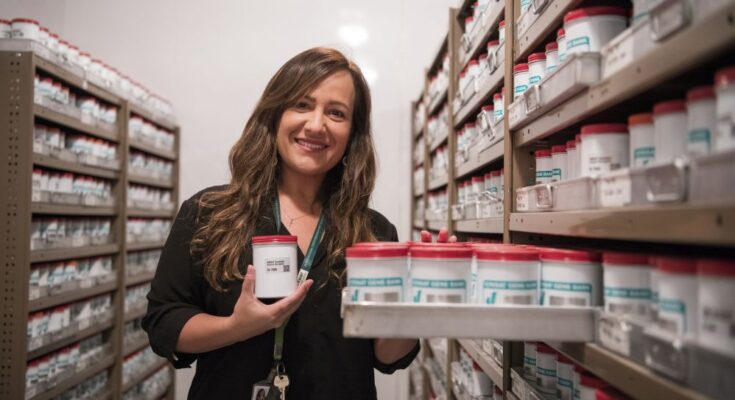 In a quest to know how long seeds live, genebanks of six global research institutions including ICRISAT have begun a 100-year experiment at the Svalbard Global Seed Vault

Hyderabad, India: In a quest to know how long seeds live, genebanks of six global research institutions including International Crops Research Institute for the Semi-Arid Tropics (ICRISAT) have begun a 100-year experiment at the Svalbard Global Seed Vault. The experiment could prove crucial for effective restoration of the world’s food resources someday. Data from seeds of 13 crops, four of which will be provided by ICRISAT’s genebank in India, will be collected during the experiment.

“ICRISAT will bring seeds of chickpea, groundnut, pearl millet and pigeonpea to the experiment during 2022-23. The seeds will be tested initially before being put in the vault for storage at -18 degree Celsius. They will be taken out for testing once every decade during the course of the next 100 years to determine longevity,” said Dr Vania Azevedo, Head, ICRISAT’s RS Paroda Genebank.

The first test sets deposited in the vault for the experiment on Thursday were barley, pea, wheat and lettuce produced by the German genebank IPK in Gatersleben. Over the next three years, six institutions will be placing seeds of other crops into the vault for the experiment. The crops and the participating institutions include–
Rice – The National Rice Seed Storage Laboratory for Genetic Resources (NRSSL) in Thailand
Groundnut, chickpea, pearl millet and pigeonpea – ICRISAT in India
Maize – Instituto Nacional de Investigação Agrária, (INIAV) in Portugal
Soybean – Empresa Brasileira de Pesquisa Agropecuária (Embrapa) in Brazil
Barley, pea, wheat, lettuce and Brassica oleracea (of the cabbage family) – The Leibniz Institute of Plant Genetics and Crop Plant Research (IPK) in Germany
Timothy – Nordic Genetic Resource Centre (NordGen) in Sweden.

“This experiment will provide future generations with valuable information about seed viability and more precise knowledge of how often seeds need to be regenerated,” said Dr Asmund Asdal, Seed Vault Coordinator at NordGen, the genebank responsible for managing the project.

The main principle for conserving seeds is that well-dried and frozen seeds from many important food crops can stay alive for a very long time in a genebank. Exactly for how long seeds can maintain germination after storage under optimal conditions is not fully explored. But, it is assumed that seeds of many species can stay alive for centuries; some species may even survive for more than thousand years.

Genebanks test seeds in their collections regularly to be able to regenerate them in time and keep the genetic resources viable and available for research and plant breeding. Increased knowledge about how long seeds can stay alive will be extremely useful for the world’s genebanks and also for the management of the Svalbard Global Seed Vault, which is a facility where genebanks store duplicates of their primary seed collections as a security in case seeds are lost at home.

Many genebanks, including the ones participating in the experiment, are about five decades old and have accumulated some knowledge about seed longevity during the course of their work. However, that knowledge is far from complete as most of it was gathered during routine work without the specific purpose of measurement of long-term viability.

“In this experiment, all the variables that cannot be measured or recorded during the normal course of genebank operations will be measured using advanced techniques when learning about seed longevity. Seeds from multiple harvest years of different crops and differing varieties produced under varying conditions in diverse geographies are subject to extensive testing for germination and gene expression once a decade over a very long time. This kind of testing hasn’t been attempted before,” added Dr Azevedo.

One Comment on “How long do seeds live? A 100-year experiment to tell”