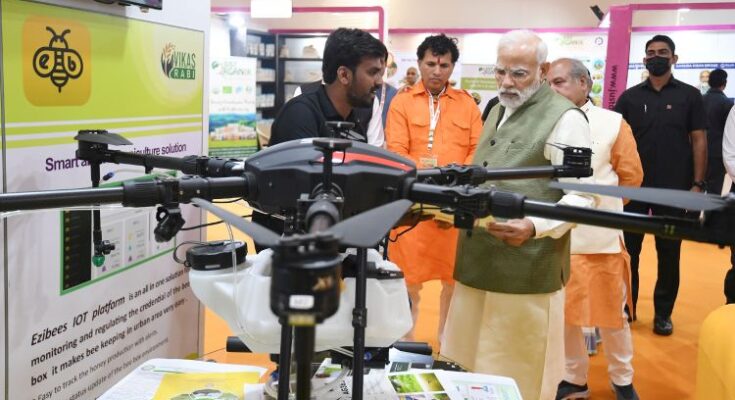 Artificial intelligence is set to transform the world; drones are going to change the face of farming in the 21st century, Dr Shivendra Bajaj, Executive Director, FSII writes

Drones are becoming famous in every aspect of life—from social media reels to shipment delivery to traffic monitoring. So how can agriculture stay away? Drones have become a crucial agent for the rapid transformation of the agriculture sector worldwide. And India is no exception to it. The adoption of drone technology is a key component of the Central government’s mission of promoting digital agriculture to strengthen the farming sector. State governments too are adopting it with vigour as they are experimenting with drones in farming and promoting their use.

Artificial intelligence (AI)-enabled drones are used for precision farming that increases productivity and thus farm income. Drones have multi-faceted uses. They make farm operations faster and more efficient. They also help farmers to save significant money by making optimum use of fertilisers and pesticides and by ensuring uniform sowing of seeds. Spraying chemicals is a time-consuming process and it poses a health hazard. Drones can fly at low height (1-3 metre) over the crops, which make the spraying of nutrients and pesticides effective and efficient, as well as allow farmers to assess standing crops through cameras. All this not just facilitates higher productivity but also brings down the expenses on crop inputs.

Farmers in the US, who grew corn, soybean and wheat could save around USD 1.3 billion every year by incorporating drones in their farm operations. There are reports that drone-led precision farming can reduce input costs by 18-20 per cent while enhancing yield by 30-100 per cent in India. Drones have shown they can be beneficial in planting seeds in the Indo-Gangetic plains, where the rice-wheat cropping system is prevalent.

Farmers can make crop surveillance of the field using infrared cameras and get real-time information about crop growth, infestation, and requirement of inputs. This helps farmers in responding to any problem sooner and takes active measures to nip it in the bud. Applications of drone technology can also be used for mapping water spread areas, pest infestation, and livestock farming besides assisting farmers in adopting good agricultural practices (GAP). Crops can be contamination-free, making them get good export prices.

Government support and encouragement for drones were evident when the Prime Minister of India inaugurated India’s biggest Drone Festival – Bharat Drone Mahotsav in May 2022.

Prime Minister called the use of drones a “milestone” for Indian agriculture and expressed confidence it would create more opportunities. The government of India has extended huge subsidies to different agriculture-related instructors, farmer producer organisations (FPO) and custom hiring centres (CHC) for purchasing and promoting drones under a new scheme of Kisan Drone. These drones are helpful for government agencies also as they can be used for crop assessment of production estimates or to process farm insurance, digitisation of land records, and can expedite claim processing and bring transparency.

Many state governments have shown interest such as the Andhra Pradesh government has decided to procure 200 Kisan Drones, which would solve the problem of labour shortage and health hazards. As excessive rains flooded farms, Karnataka has decided to use drones for crop assessment to bring transparency. Tamil Nadu too has roped in drones as a part of the digital intervention to make agriculture and farming profitable and sustainable. Gujarat and Rajasthan too, have joined the journey of the digital revolution.

Drones were used in 2020 to ward off locus attacks, saving millions of hectares of farmland. Farmers are getting first-hand experience in operating drones and their usefulness such as testing the moisture of soil, which is not possible through traditional ways. State governments are confident that drones will be game-changer not only for farmers but for the entire agri economy.

Despite knowing the importance of technology, our agriculture did not adopt it for years. However, we can see a gain in momentum now. Both Central and state governments are keen on embracing it. The involvement of agri startups, FPOs and CHCs in drone technology will allow farmers, especially those financially poor to try new technological solutions. As drones become affordable and easily accessible, more and more farmers will start using them. Moreover, drones can create employment opportunities in rural India, especially for the tech-savvy youth and bring them back to farms. As they say, artificial intelligence is set to transform the world; drones are going to change the face of farming in the 21st century.