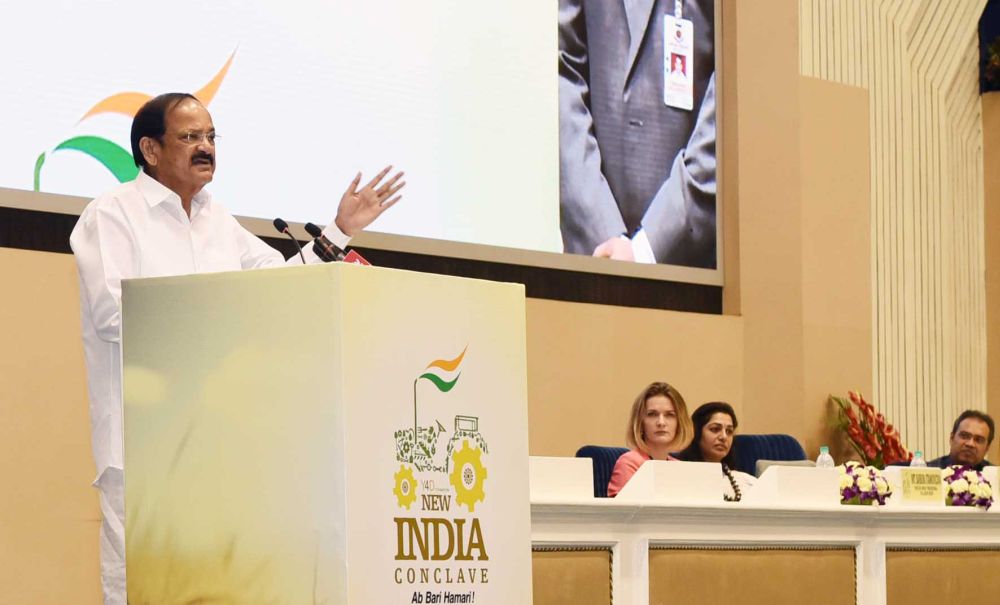 Addressing a gathering in New Delhi, Vice President of India, M. Venkaiah Naidu has said that agriculture is the backbone of Indian economy and it should be on the top of the agenda of the government

The Vice President of India, M. Venkaiah Naidu has said that agriculture is the backbone of Indian economy and it should be on the top of the agenda of the government. He was addressing the gathering after inaugurating the New India Conclave being organised by Y4D Foundation, in New Delhi Monday.
The Vice President said that there is a need to make agriculture remunerative and farmers must be encouraged to take up allied activities like poultry, horticulture, sericulture, beekeeping, dairy and others to improve income. He further said that there is a need to put in place for easy availability on loan at an affordable price and assured power must be supplied to farmers living in the villages. He said that schemes like loan waivers and free power may not provide lasting solutions to agriculture distress in the country.
The Vice President said that as the country we have failed to translate Gandhiji’s dreams into reality even 70 years after attaining Independence. There has been uneven and lopsided development with urban areas witnessing rapid growth and the rural areas remaining backward.
The Naidu stressed on the need to bridge urban-rural divide at the earliest so that India’s progress towards becoming the third largest economy in the world in the next 10-15 years is not hampered. The rural areas have to become thriving hubs of economic activities with the agriculture playing an important role in the overall prosperity of the rural people.
The Vice President called on the youth to be in the forefront of freeing India from the clutches of poverty, illiteracy and other social evils like gender and caste discrimination, particularly in the rural areas. Youth of our country need to acquire the right mix of knowledge, skills and attitudes required to overcome the 21st century challenges and reap the demographic dividend for the country’s growth and development.