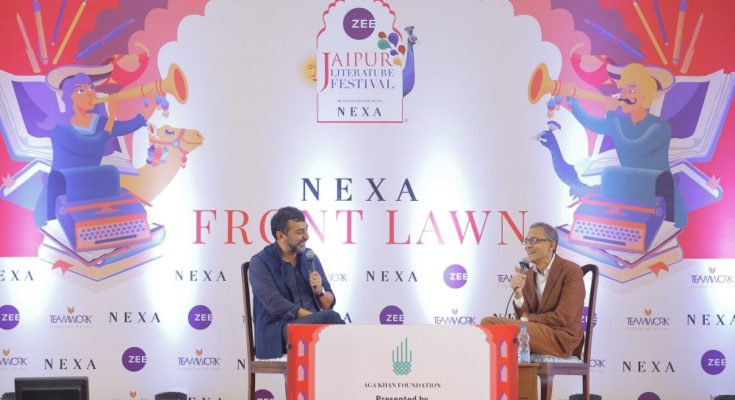 Jaipur Literature Festival 2020 featured stalwarts across literature, art, Economics, cinema and science along with a series of discussions on the constitution, nationalism and the ideas of India

Prediction made by Wall Street Journal (WSJ) in 1989 regarding the impact of market economy went wrong as instead of Zimbabwe, as predicted China emerged as the fastest growing economy and similarly several studies, surveys and pilot projects can give incorrect picture about the economy, Nobel laureate and economist Abhijit Banerjee said at Jaipur Literature Festival (JLF) on Sunday.

Economics has often been called the ‘dismal science’. There are a lot of people who are sceptical about whether economics can solve the big problems that confront humanity today- chief among them being poverty. The work of Abhijit Banerjee and his partners has shown that these sceptics may not be correct. The core of their work has centred on small, data-driven interventions which have the potential to solve complex problems all over the world.

At JLF, Banerjee’s views on poverty came as a breather for the government because of sluggish economic growth. The Noble laureate said, “There is a huge reduction in poverty in India in the last 30 years. “Poverty was 40 percent in 1990, and now, it is less than 20 percent,” he added. “Since the population has grown, it is an enormous reduction in the number of poor people.”

Banerjee said there was no silver bullet to alleviate poverty. “Poverty, like cancer, is many problems. There are many diseases. Some people are education poor, some are heath poor and some asset poor. You have to figure out what is missing. Trying to solve everything with one action is unviable to work and never does work,” he said.

He advocated for freebies to the poor. “There is so much prejudice about the abilities of the poor. Give the very poor some asset. Not lend, but give them an asset. Maybe a cow, some goats or trinkets to sell, then you look at what happened to these people after 10 years. They will be 25 percent richer, they will be healthier and happier. It encourages them to keep trying and they work harder than the people who didn’t get the assets,” Banerjee suggested.

The five-day Jaipur Literature Festival 2020 featured stalwarts across literature, art, economics, cinema and science along with a series of discussions on the constitution, nationalism and the ideas of India.

Festival producer Sanjoy K Roy, in his felicitation address said, “In the world of story-telling, visual art is the earliest form which brings out the colour and creativity of incredible India, the world needs to see.” He added that this Pattachitra art-form carries the traditional stories from the remotest of villages in Odisha and needs to be shown to the world.

Niti Aayog CEO, Amitabh Kant talked about his latest book Incredible India 2.0: Synergies of Growth and Governance. Kant highlighted India’s economic developments which establish the extent of path-breaking solutions for key sectors that can boost the country’s growth, and said, “Through initiatives such as GST and Insolvency and Bankruptcy Code, we have carried out all the right structural reforms for economic growth.”

“Capitalism is a reality. However, it is far worse to be governed by a corporation than a government,” said Festival Co-director and historian William Dalrymple, during a session on his latest bestseller The Anarchy.