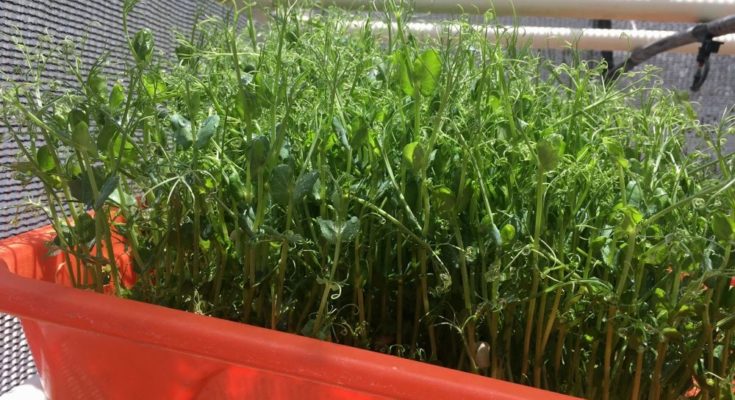 In a day, 25 to 30 Kg of fodder is generated in a Kambala Machine, thereby creating enough fodder for at least 4 to 5 cows in a week

With an aim to help resolve the acute fodder crisis across India, a Bengaluru-based Agri-tech start-up – Hydrogreens has designed “Kambala”, a hydroponic source of fodder for dairy cattle.

An avid enthusiast of agriculture, Vasanth decided to explore the domain further and contribute to a sustainable solution. After interacting with the small and marginal dairy farmers, and landholders in Karnataka, Kerala, Andhra Pradesh, Gujarat, Rajasthan, and Odisha, Vasanth noted the constraints like altering climate, recurring droughts and the consequent economic turmoil at the grassroots level that the farmers face.

How does a Kambala Work?
Vasanth thought along the lines of hydroponics, since he had seen many farmers turning towards the method for better fodder production. Seeing the necessity and demand of the hour, he came up with a sachet model that would work for the small, marginal farmers and individual families. Vasanth and his partner – Jeevan M. got their product patented by the name of Hydrogreens in 2019.

The product can be compared to the structure of a large refrigerator, occupying 3×4 feet of ground space and standing 7 feet tall. Inside, the racks are installed for growing fodder – 7 racks for 7 days of the week. Each rack comprises four trays where approximately 700 grams of high-protein seeds of maize are added one day a week. Alternately, the seeds of wheat or barley can also be used. Within the next few days, the rack becomes covered with fresh, green fodder ready to be dispensed to the cattle. The insides of the racks are connected with 14 micro-sprinklers that spray water occasionally according to the need, once the system is connected to a power source.

In a day, 25 to 30 Kg of fodder is generated in a Kambala Machine, thereby creating enough fodder for at least 4 to 5 cows in a week. The Kambala requires minimal water of around 50 litres for 3 days as compared to around 70 to 100 litres of water required to grow just 1 Kg of fodder in traditional field cultivation. The Kambala is also enveloped with a black net cover from the outside, thereby protecting the growing fodder from excessive heat while allowing ample ventilation. This allows the system to be installed in the areas with high daytime temperatures like interior villages of Rajasthan.

Priced at Rs. 30,000, each Kambala generates an electricity bill of less than Rs. 70 in a year. The founders have also commissioned a solar-powered version of the machine which is priced at Rs. 45,000 at present. Around 41 units of the solar Kambala are being installed in Anantapur district of Andhra Pradesh and several other units are already active in Rajasthan, Gujarat and Karnataka. In total, the Hydrogreens have installed around 130 Kambala units all over the country and benefited hundreds of farming families.

Before establishing Hydrogreens in January, 2019, Vasanth Kamath and Jeevan M. underwent training on cattle and fodder growth at the ICAR-National Institute of Animal Nutrition and Physiology, Bengaluru. The Institute signed a Memorandum of Understanding with Hydrogreens Agri Solutions, Bengaluru on February 5, 2019 as per the guidelines of Agrinnovate India for a joint R&D programme for standardising the key operational parameters like seed density, watering schedule and minimisation of mold infestation among others for an economical model of hydroponic grain sprouts production unit.

The outcome of this joint programme helped in economical hydroponic fodder production for meeting the green fodder deficit during the adverse weather conditions for better livestock productivity.

Restoring a farmers lost income
Sharing his experience, Pukraj Jaipal, a farmer and social worker from Rajasthan said about the machine to be convenient in operation and providing fodder multiple times. The machine also helped in providing better quality of the fodder which boosts milk production in cattle.

Community fodder stations
Presently, the Hydrogreens is engaged in setting-up around 25 community fodder stations in Chitradurga district of Karnataka. These are small commercial units, in each of which a Kambala has been commissioned under the patronage of local agricultural non-profits. The dairy farmers and villagers with cattle can come up to the station every morning and buy the required amount of high-protein fodder for their cattle.