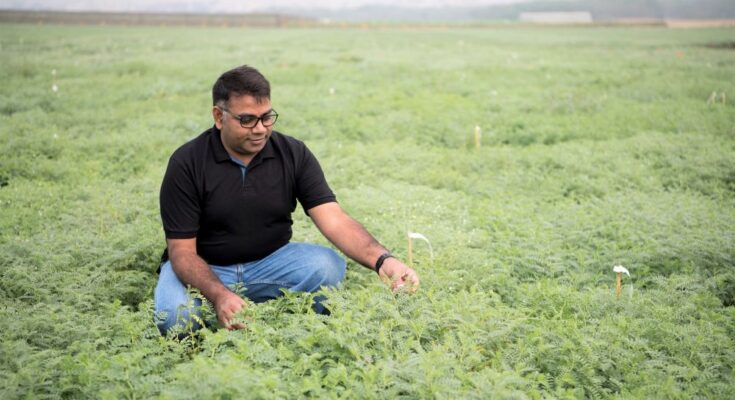 Led by ICRISAT, the research team identified 29,870 genes that includes 1,582 previously unreported novel genes. The research is the largest effort of its kind for any plant, putting chickpea in a small group of crops with such an extensive genome map

An international team of researchers from 41 organisations has assembled chickpea’s (chana) pan-genome by sequencing the genomes of 3,366 chickpea lines from 60 countries. Led by the International Crops Research Institute for the Semi-Arid Tropics (ICRISAT), the team identified 29,870 genes that includes 1,582 previously unreported novel genes. The research is the largest effort of its kind for any plant, putting chickpea in a small group of crops with such an extensive genome map.

“By employing whole genome sequencing, we have been able to affirm the history of chickpea’s origin in the Fertile Crescent and identify two paths of diffusion or migration of chickpea to the rest of the world. One path indicates diffusion to South Asia and East Africa, and the other suggests diffusion to the Mediterranean region (probably through Turkey) as well as to the Black Sea and Central Asia (up to Afghanistan),” said Prof. Rajeev Varshney, Research Program Director at ICRISAT and leader of the study..

He added, “More importantly, this research provides a complete picture of genetic variation within chickpea and a validated roadmap for using the knowledge and genomic resources to improve the crop.”

Grown in more than 50 countries, chickpea is the world’s third-most cultivated legume. It is indispensable to diets in many nations and an important source of dietary protein, especially in the Global South. ICRISAT led the effort to sequence the first chickpea genome (a Kabuli line) in 2013. This sequence paved the way for developing molecular resources for the crop’s improvement.

A larger endeavour to sequence more lines began soon after as the need to completely understand the genetic variation at species level, including in landraces and wild types, became apparent. In the latest research, the study’s authors report sequencing 3,171 cultivated accessions and 195 wild accessions of chickpea that are conserved in multiple genebanks. These 3,366 accessions are representative of chickpea’s genetic diversity in a much larger global collection.

The cultivated chickpea species is scientifically called Cicer arietinum. The study points to C. arietinum diverging from its wild progenitor species, Cicer reticulatum, around 12,600 years ago. Chickpea history is associated with a strong genetic bottleneck beginning around 10,000 years ago. The population size reached its minimum around 1000 years ago before seeing a strong expansion in the last 400 years, which suggests a renewed interest in chickpea agriculture across the world. The approach taken to analyse the divergence of eight Cicer species over time can also be used to identify misclassification or duplication of accessions to better manage the germplasm in gene-banks, the authors report in the study.

You may also like to read: Global team cracks genetic code to develop high-yielding, climate-resilient chickpea

“The demand for chickpea is set to increase in the coming years as the world’s population rises. Research like this is the need of the hour to help major producing countries like India boost crop production while making crops climate-resilient,” said Dr Trilochan Mohapatra, Director General, Indian Council of Agricultural Research (ICAR), and an author on the study.

Dr Jacqueline Hughes, Director General, ICRISAT, said, “By developing many genomic resources for chickpea over the last decade, ICRISAT has helped the crop shed its ‘orphan’ tag. With our partners in agricultural research for development, we will continue to research chickpea and translate findings into crop varieties that benefit farmers, consumers and nations.”

Putting the pan-genome to work

Furthermore, the study identified blocks of genes in landraces (domesticated varieties developed by farmers) that can significantly enhance the performance of the crop by improving traits like yield, climate resilience and seed characteristics. Called haplotypes, these blocks of genes are what crop breeders strive to bring into cultivars. Using historical data of all chickpea varieties released between 1948 and 2012, the research sheds light on the deployment of these haplotypes in the varieties.

You may also like to read: ICRISAT, University of Reading join hands to grow high nutrition food

“We examined 129 varieties released in the past. Though a few superior haplotypes were detected in some of these varieties, we found that most varieties lacked many beneficial haplotypes. We have arrived at 56 promising lines that can bring these haplotypes into breeding programmes to develop enhanced varieties,” explained study author Dr Manish Roorkiwal, Senior Scientist in Genomics and Molecular Breeding at ICRISAT.

ICRISAT and other organisations have been using genomics-assisted breeding approaches by targeting just one or at most two genes. Nevertheless, these efforts resulted in seven improved chickpea varieties in India and Ethiopia over the last three years.

“Genomic resources are crucial for accelerating the rate of genetic gains in crop improvement programmes. It is hoped that the knowledge and resources made available through this study will help breeders across the world revolutionise chickpea breeding without eroding its genetic diversity,” said Dr Arvind Kumar, Deputy Director General-Research, ICRISAT.

To take the study’s findings to the farm, the authors proposed three breeding approaches based on genomic prediction that aim at improving 16 traits and enhance chickpea productivity. They demonstrated that the approaches work by applying them for enhancement of 100-seed weight, a critical yield trait, and predicting an increase ranging between 12 and 23 per cent.