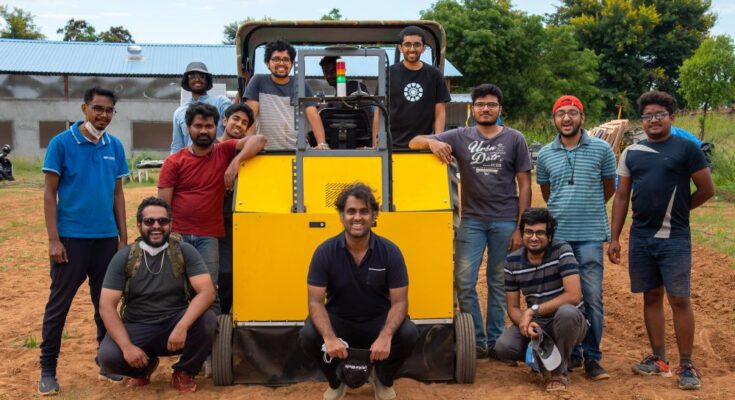 With 33 million acres under cultivation, India is the largest grower of cotton in the world with an average weeding spend of US$100 per acre. TartanSense aims to focus on cotton as well as several other crops with high cost of weeding

Agritech robotics start-up TartanSense announced today that it has raised USD 5 million in Series A funding. The round was led by FMC Ventures and Omnivore, with participation from existing investor Blume Ventures. This brings the total funds raised by the company to USD 7 million, after raising a USD 2 million seed round in March 2019. TartanSense builds small agricultural robots, equipped with artificial intelligence (AI) assisted computer vision, to help small farms reduce their expenditures and improve their incomes.

BladeRunner, TartanSense’s latest robot, can identify, precisely locate, and mechanically uproot undesirable weeds as well as spot spray on the desired crop – reducing chemical usage by 45 per cent as well as increasing weeding efficiency by seven times. The future of agriculture is this combination of machine learning software and frugal hardware, helping farmers move from farm-level decision making to plant-level decision making.

Based in Bangalore, TartanSense was founded in 2015 by Jaisimha Rao, an alumnus of Carnegie Mellon University who returned to India after working as a quant on Wall Street. He soon assembled a core team of Carnegie Mellon alumni with rich experience in robotics, computer, electrical, and mechanical engineering. The Carnegie Mellon link at TartanSense even extends to the company name since students and alumni of CMU are referred to as Tartans.

Jaisimha Rao, Founder, TartanSense, said, “Our mission is to make smallholder farmers wealthier by shipping monetisable robots. TartanSense will have the world’s largest fleet of agricultural robots in the next 18 months. We are grateful to have amazing investors like FMC Ventures, Omnivore, and Blume Ventures backing us in our passion to empower farmers.”

You may also like: Google India selects AgNext for Start-up Accelerator program

Amar Singh, Managing Director, FMC Ventures, said, “TartanSense is a pioneer in ground-based precision spraying in India. With growers’ interest in mind, it has developed a unique, low-cost precision application technology with a very high level of accuracy. FMC Ventures is excited to support TartanSense as they combine artificial intelligence and robotics to improve how growers apply crop inputs.”

Mark Kahn, Managing Partner, Omnivore said, “TartanSense’s innovation in precision agritech can accelerate the transformation of Indian agriculture. We were privileged to be one of the first institutional investors in TartanSense and remain so as the start-up reaches new milestones.”

Karthik B Reddy, Managing Partner, Blume Ventures, said, “Jaisimha and team TartanSense have been committed to solve large scale agri problems for farmers since we first met three years ago. By building one of the most robust computer-vision led weeding technologies for Indian conditions, we are excited to invest further. We believe TartanSense will reach many corners of global farming and will best solve for several precision farming use cases”.

India is the largest grower of cotton in the world, with 33 million acres under cultivation and an average weeding spend of US$100 per acre. The market potential only for weeding in cotton is over 3 billion USD annually. TartanSense aims to focus on cotton as well as several other crops with high cost of weeding.