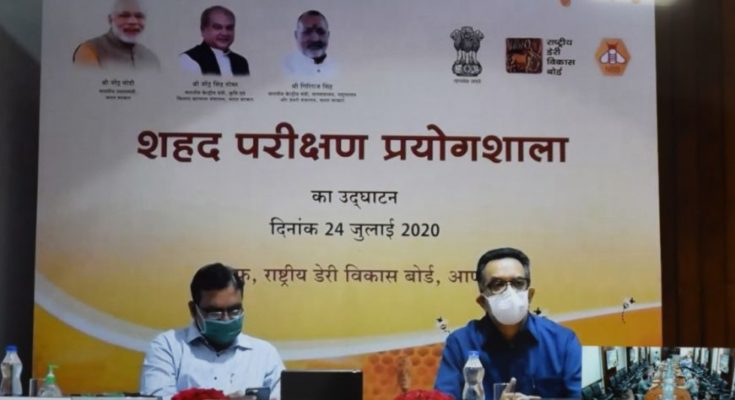 On this occasion, agriculture minister mentioned about bringing in sweet revolution in the country by encouraging large number of farmers for production and marketing of honey and earn more profit in agriculture. Addressing the meeting through VC, he said that the beekeeping enterprise has to play a major role in supplementing the income of farmers. He further informed that the ministry has taken up several activities to promote beekeeping under Mission on Integrated Development of Horticulture (MIDH). Further, National Mission for Beekeeping being implemented through National Bee Board and the states.

Tomar expressed the need to focus on imparting training on scientific beekeeping and production of high value honey and honey-bee products and creating awareness among farmers, bee-keepers and land less labourers about the scope and potential of beekeeping enterprise as an additional source of income to them. He intimated that the Department of Agriculture, Cooperation & Farmers’ Welfare has approved the National Beekeeping and Honey Mission (NBHM) for a period of two years. The beekeeping enterprise would bring change in the livelihood of farmers and rural poor leading to sustainable agriculture development.

Speaking on the occasion, Giriraj Singh, Union Minister of Fisheries, Animal Husbandry and Dairying said, “Adulteration is a major problem in honey production and honey is being adulterated with high fructose corn syrup or rice, tapioca, sugarcane and beet syrup that are cheaper and resemble honey in physico-chemical properties.He further said that the establishment of this honey testing laboratory would help for quality production of honey and its export to other countries. He also suggested to promote the cultivation of flora based crops to enhance the production of honey and honey bee products.

Based on the parameters notified by Food Safety and Standards Authority of India (FSSAI), NDDB has set-up this lab with all the facilities and developed the test methods and protocols, which have been accredited by National Accreditation Board for Testing and Calibration Laboratories (NABL). FSSAI has now notified new standards for honey, bee wax and royal jelly.