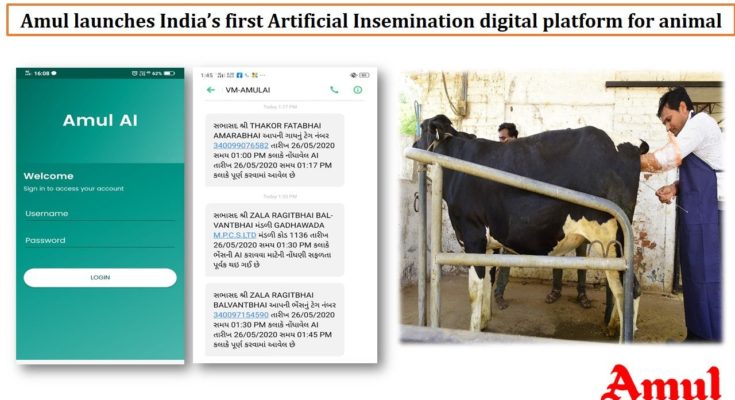 Artificial insemination is a proven scientific method for improving genetics of animals. Amul Dairy has decided to digitise the artificial insemination service in its operational area. It was initiated on an experimental basis in the year 2019 in 25 village milk producer societies and was monitored and studied for one year.

After getting appreciable functional and operational results, all the 1,200 village level milk producer societies of Amul Dairy milkshed area have been covered under digitalisation. More information about this initiative shared by Amit Vyas, Managing Director, Amul Dairy, Anand. On registration in Amul call centre for AI, an automatic message is sent to the milk producer as well as the artificial insemination technician of the milk society through mobile.

Digitisation of artificial insemination provides instant service to the milk producers as well as information of milch cattle is also stored in the mobile software system and analysed.

The artificial insemination technicians do not have to write or save any kind of register as every information has to be filled in the mobile application system on the spot. This helps save a lot of time and hence, performs better.

A very good response to this method has been received from the members of all village milk producer societies in the Amul Dairy milkshed area. Digitisation of AI services will help get the data of pregnancy months, calving prediction and milk production accordingly. This helps plan milk processing at plant level. At present, registration of more than 4,500 artificial insemination calls done by Amul Call Centre daily. Still Amul Dairy is trying to make this method more effective and efficient. Amul Dairy performs more than one million artificial insemination annually in milkshed area. Through digitalisation, transparent information as well as its analysis can be used to make accurate decisions and make the animal husbandry business flourish, Vyas further informed..