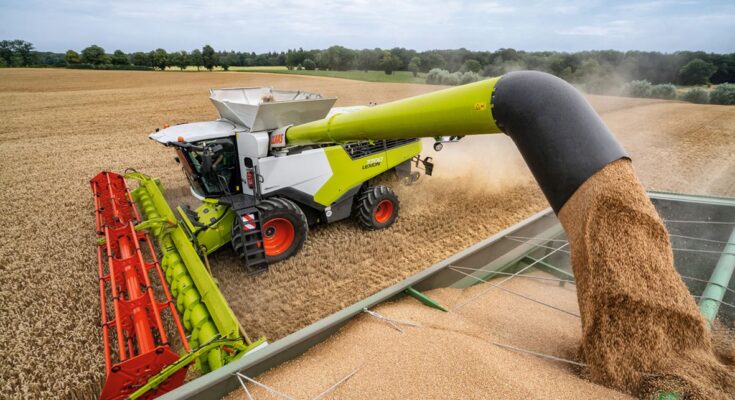 “CLAAS managed to achieve growth in sales and to improve profitability despite the pandemic and shutdowns in production. In the process, our widespread international presence has paid off,” said Thomas Böck, Chairman of the CLAAS Group Executive Board.

Whilst sales in Germany, France and the other Western European countries remained stable on the whole, they grew significantly in Eastern Europe and especially Russia. At around 20 percent, CLAAS achieved its strongest growth in sales outside of Europe, with North America proving to be the most important growth driver.

Implementation of major investment projects going according to plan
Despite the adverse effects of COVID-19, CLAAS succeeded in implementing its important investment projects as planned. At the Le Mans tractor plant, state-of-the-art production technologies have increased flexibility and efficiency. At Harsewinkel, the first phase of the major modernisation project in the sphere of combine harvester assembly was completed. The new sales centres in France and the United Kingdom were launched, offering additional options in terms of service and after-sales business. They receive optimum support from the new high-bay warehouse in Hamm. On top of increased capital investments in fixed assets totalling 131 million euros as against previous year’s 125 million euros, expenditure on research and development, totalling 237 million euros, once again remained at a very high level as compared to previous year’s 244 million euros.

Crisis-resistant production and sales processes
At first, this positive business development was not to be expected. Due to its short decision-making processes, CLAAS quickly adapted to the new challenges in the initial phase of the Corona crisis. During production shutdowns of several weeks at nearly all of the production sites, extensive preparations were made to ensure that production could be restarted as soon as possible. Thanks to the high dedication of staff and a close-knit logistics network, the supply to customers was maintained as best it could be.

In the wake of Agritechnica and numerous hybrid events, it was still possible to effectively communicate the latest product innovations. At the world’s largest agricultural engineering trade fair in November 2019, CLAAS received the “Machine of the Year 2020” award for the LEXION 8000/7000, the JAGUAR 900 and DataConnect, a cross-manufacturer cloud-to-cloud solution. The AXION TERRA TRAC, the first fully suspended semi-crawler tractor, also met with a very positive response from experts.

Outlook
In view of the Coronavirus pandemic and the international trade conflicts which are still smouldering, negative effects on sales and earnings cannot be ruled out.

Further risks could arise from volatile producer prices and changes in the political framework for farmers in core markets. Despite these uncertainties, CLAAS expects sales and earnings for the current 2021 fiscal year to remain at the previous year’s level.