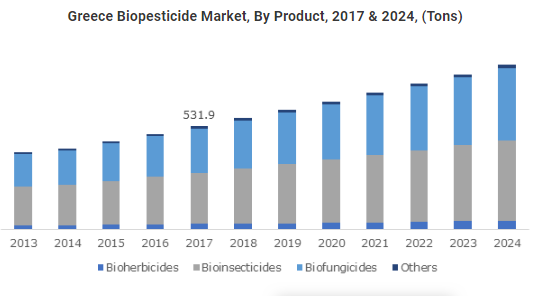 Expanding the agricultural output to reduce the dependency on imports and increase the contribution of agriculture to the economy is propelling the Greece biofertilizer, biopesticide and biostimulant market growth. Additionally, reduction in arable land will positively influence the business demand over the next few years. Cost effectiveness of the product is among the key features proliferating the product usage.

According to the Food and Agriculture Organisation of the United Nations (FAO), the agricultural land area in the country was 7,783 thousand hectares in 2014. As per European Commission, in 2017, fruits accounted for the highest market share of 21.6 per cent in Greece, which was around 7.8 per cent of the EU fruit revenue. Olive oil is among the country’s most exported agricultural products with 17.4 per cent of the EU olive oil revenue share. However, lower fertility of soil along with government subsidies on organic farming owing to growing environmental concerns is supplementing the market expansion in Greece.

Greece biostimulants market from extract based active ingredient is expected to account for over 30 per cent market share in 2024. High abiotic and biotic stress tolerance along with attractive seed germination will boost the industry growth from the ingredient. Improved aeration and soil structure will support the product demand.

Greece biopesticide market from foliar spray generated sales was over 430 tonnes in 2017 and is forecast to dominate the market over the next few years. Higher resistance against severe climatic conditions such as drought will propel the industry development through foliar spray. Enhanced nutrient absorption by the roots of the plant by foliar spraying along with the benefit of immediate effect on the plant will escalate the business demand.

Greece biofertilizer market from cereals and grains is forecast to grow at over 12 per cent from 2018 to 2024. Wheat, maize, rice, and barley are the largest produced cereals in Greece. According to European Commission, in 2017, cereals and grains accounted for 7.7 per cent of the total agricultural output of the country. However, Greece fruits accounted for 7.8 per cent of the EU fruits revenue.

Greece liquid form biostimulant market is projected to witness fastest CAGR during the forecast period from 2018 to 2024. Higher temperature resistance accompanied by the longer shelf life of the product are among the key factors driving the liquid form biostimulant market expansion. Uniform application along with applicability in foliar spray technique will boost the industry demand through the segment.