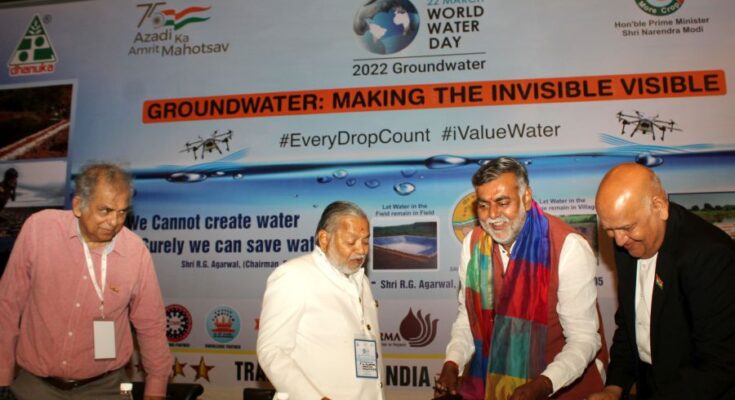 Behavioural change is required for water conservation. We need to save every drop of water and the change should come from us, the minister said

On the occasion of World Water Day 2022, Minister of State for Jal Shakti & Food Processing Industries, Prahlad  Singh Patel today while speaking on water conservation called upon people to efficiently use water for saving valuable resources for future generations. He was speaking at an event – ‘Groundwater – Making the invisible visible’- organised by Dhanuka Group in association with FICCI, IRMA, VAMNICOM, IIPA – Delhi Regional Chapter and CNRI

“The situation of groundwater is indeed alarming and there is an urgent need for behavioural change. Under the leadership of Modi Ji, we pledged to make our country open defecation free and we have succeeded in it. This is a classic example of behavioural change. A similar behavioural change is required for water conservation. We need to save every drop of water and the change should come from us,” the minister said.

Speaking on this occasion, Ramesh Chand, Member, Niti Aayog expressed serious concern about India’s cropping pattern. “India accounts for 18 per cent of the world’s population, 2.4 per cent of land and 4 per cent of water. If we look at these ratios, we should have been facing scarcity of land more than water. But it is not so. When it comes to land, there is more concern of quality than quantity whereas when it comes to water we have issues with both quality and quantity. The reason behind the same is that we are not making water available in accordance with demand. The demand for water is rising at a faster rate, the availability of water is also increasing but still, there is a gap between the rate at which demand for water is growing and the rate at which the availability is improving. This gap has its own reasons, consequences, and explanations. The biggest explanation is that in the last 30 years our cropping pattern, our technique of crop cultivation, and our preferences have turned water-intensive.”

You may also like to read: Indian agriculture will see tremendous growth with use of drones in agrochemical spraying, say experts

“If we evaluate at a regular interval of a decade, we would find that the quantity of water consumption for producing one kilogram of the crop has increased decade over decade. On the other hand, land used for producing that one kilogram of the crop has reduced over time. It simply means, we always focused on the productivity of crop per hectare or per acre and did not give required attention towards per cubic of water used for growing of crops,” Ramesh Chand added.

Alluding to the need for biodiversity, Dr. Ashok Dalwai, CEO, National Rainfed Area Authority (NRAA) said, “In our country, we have ample biodiversity but at the same we are also destroying biodiversity by cutting forests, destroying pastureland and compromising water bodies. We need to keep our land green as much as possible. Growing grass or agroforestry may play a vital role in it.”

Earlier setting the tone for the event, RG Agarwal, Chairman, Dhanuka Group emphasised on the need for the adoption of modern technologies for agricultural purposes.

“We need precision agriculture today. Adoption of water-saving technologies such as sprinkler and drip irrigation systems. Besides time, the usage of drone technology for spraying pesticides and fertilisers would also help in saving a substantial amount of water being used for agriculture purposes. The need of the hour is the states must also work on water conservation on a priority basis, govern local irrigation systems, encourage its efficient use, and promote conservation through building dams and reservoirs,” Agarwal said,

He also spoke about the need to create awareness about water conservation among students as well as children.

It is pertinent to mention here that for more than a decade, Dhanuka Group has been at the forefront of spreading awareness and promoting sustainable use of water in agriculture and other economic activities. The Group has been educating and spreading awareness on water conservation through its flagship campaign “khet ka pani khet mein aur gaon ka pani gaon mein” (farm land’s water remain in the farmland and water from the village remain in the village). In the past, to conserve rainwater, the company has also funded the construction of check dams at Jugalpura, Devipura (district Sikar) and Mainpura ki Dhani and Sankotra, (Jaipur district) in Rajasthan, which are now fully operational and have been filled with rainwater.