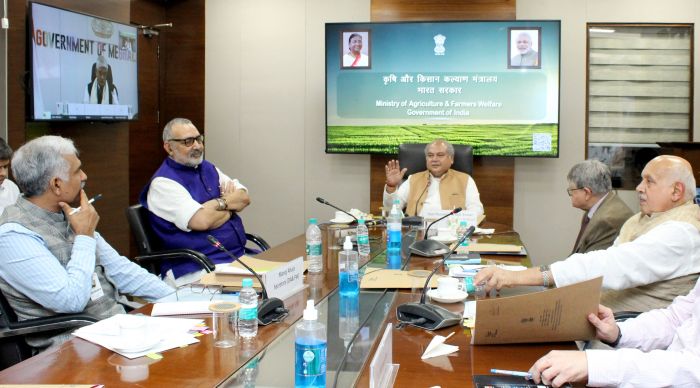 In the meeting, the minister launched the NMNF portal. He said that the mission of natural farming in the country would be taken forward with everyone's cooperation

Union Agriculture Minister Narendra Singh Tomar chaired the first steering committee meeting of National Mission on Natural Farming on Thursday in New Delhi. In the meeting, the minister launched the NMNF (National Mission on Natural Farming)  portal. He said that the mission of natural farming in the country would be taken forward with everyone’s cooperation. In this regard, he asked the officers to coordinate with the State governments and Central departments and enable market linkage so that the farmers get more ease in selling their products. Union Rural Development Minister, Giriraj Singh; Jal Shakti Minister, Gajendra Singh Shekhawat; Uttar Pradesh Agriculture Minister Surya Pratap Shahi; Union Agriculture Secretary, Manoj Ahuja and senior officers of various ministries attended the meeting.

The portal launched today has been developed by the Union Ministry of Agriculture and Farmers Welfare. It contains all the information about the mission, implementation outline, resources, implementation progress, farmer registration and blog which will be useful for the farmers. Also, this website will help in promoting natural farming in the country.

You may also like to read: Agriculture ministry to set up a division to accelerate agri startups

Jal Shakti Minister Shekhawat said that work is being done for natural farming on the banks of the river Ganga. The Ministry of Jal Shakti has made a roadmap by identifying 75 Sahakar Ganga villages in the first phase by signing an MoU with Sahkar Bharti and training has been given to the farmers.