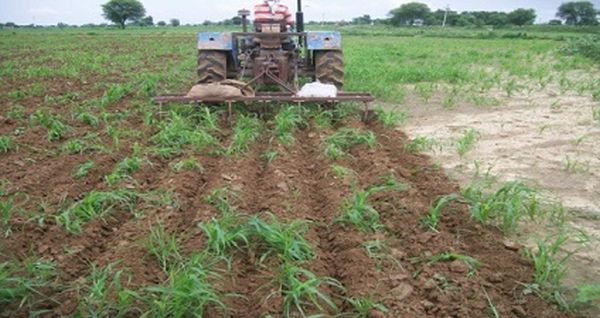 India is the top producer of millets worldwide. Pearl millet (Pennisetum glaucum L.), locally called Bajra, accounts for two-thirds of the total millet produced in the country. In the dry regions of arid and semi-arid climates, the dual-purpose crop pearl millet is produced for cereals as well as green/dry livestock fodder. Pearl millet is increasingly promoted as a nutritious cereal grain for rural communities with limited resources. Fortunately, the farmers in these regions use animal-based farming systems, feeding the livestock straw produced from pearl millet. It was cultivated using traditional methods in undulated fields in rainfed regions. The situation resulted in low productivity and profitability along with rainwater erosion during the rainy season.

In marginal areas with low inputs, the pearl millet crop is primarily grown during the rainy season under which effective weed management is a considerable difficulty. There has been a need for a system for managing weeds that is both ecologically sound and energy-efficient, along with rainwater harvesting. In pearl millet, herbicides are also useful for controlling weeds. However, the quality of the grain, fodder, soil, and ecosystem has been diminished by the direct and indirect effects of herbicide on the soil. Farmers worry that applying herbicides may compromise the quality of the animal feed and the health of the animals since this crop serves as a substantial source of animal fodder.

You may also like to read: How homestead hatchery-based Bengal catfish seed production brings a viable livelihood model for landless farm women

Pearl millet’s biophysical and economic sustainability must be increased by boosting rainwater conservation and efficient usage as well as by lowering cultivation expenses and energy-intensive processes. In the Chambal division of Madhya Pradesh, the current study was carried out as part of the Farmer First Programme (FFP) project on rainfall conservation as well as weed control using laser-assisted field levelling and ridge furrow technology of pearl millet.

The advantages of using a laser levelling method and a tractor-operated ridge furrow at 40 cm intervals 25 days after sowing for weed control over the conventional levelling technique and chemical weed control (use of 2, 4-D @1.0 kg/ha application at 20 days after sowing or 10 to 30 cm tall plant) that farmers have been using since 2017 in 20 farmers’ fields in adopted villages. After the first monsoon rains, pearl millet (var.-hybrid) was sowed in the first to second week of July. For pearl millet, the seed rate was 4 to 5 kg per hectare.

The agronomical practice packages recommended by the Rajmata Vijayaraje Scindia Krishi Vishwa Vidyalaya (RVSKVV), Gwalior, were applied during the programme. Due to timely rains at crucial periods of pearl millet development, the crop was matured using rainwater. At the maturity stage, yields of grain and straw were recorded along with yield-attributing characteristics of crops. At the mature stage, weed biomass and density were assessed in each plot.

You may also like to read: IRRI scientists demonstrate rice varieties to fight abiotic stresses and hidden hunger

When compared to current farmers’ practises (FP), the revolutionary dual-purpose technique for weed control and rainwater conservation in rainy season crops of pearl millet with ridge furrow spacing was at 40 cm. In comparison to FP, the ridge furrow at 40 cm increased grain yield by 18 per cent, net returns from an additional INR 13,095 per hectare, total water use by 37 mm per hectare and water productivity by 33.1 per cent.

Throughout all of the chosen villages, the proportionate impact of new, enhanced technology was embraced, and now pearl millet cultivation is practiced across Chambal region in Madhya Pradesh. The overall findings support the use of ridge furrow spacing of 40 cm at 25 days after sowing in standing pearl millet crops during the rainy season to increase yield, net returns, and water productivity. This ground-breaking method reduced cultivation expenses and conserved rainwater while sustainably increasing productivity for dietary security and economic prosperity.