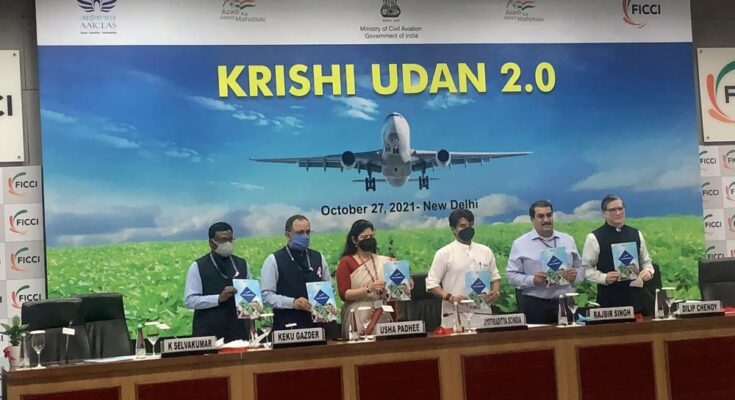 Krishi UDAN 2.0 lays out the vision of improving value realisation through better integration and optimisation of agri-harvesting and air transportation and contributing to agri-value chain sustainability

In order to leverage air logistics for transportation of agricultural produce, Union Minister of Civil Aviation, Jyotiraditya M. Scindia launched the Krishi UDAN 2.0 scheme of the Government of India Wednesday..

Krishi UDAN 2.0 lays out the vision of improving value realisation through better integration and optimisation of agri-harvesting and air transportation and contributing to agri-value chain sustainability and resilience under different and dynamic conditions. The scheme proposes to facilitate and incentivise the movement of agri-produce by air transportation.

Jyotiraditya M. Scindia, Union Minister of Civil Aviation said, “Krishi UDAN 2.0 is an example of this government’s collaborative approach towards policymaking. This scheme will open up new avenues of growth for the agriculture sector and help attain the goal of doubling farmers’ income by removing barriers in the supply chain, logistics and transportation of farm produce.”

Talking about the endeavour to accomplish convergence between the two important but diverse areas in India’s economic roadmap i.e. agriculture and aviation, Jyotiraditya M. Scindia said, “We want to take the Anndata (farmers) to the highest level, by adopting the model of A2A – Agriculture to Aviation. The convergence between the two sectors is possible because of three primary reasons – Evolutionary possible use of biofuel for aircraft in future, use of drones in the agriculture sector, and greater integration and value realisation of agricultural products through schemes like Krishi UDAN.”

The enhanced version of the Krishi UDAN scheme was formulated with support from AAICLAS – a 100 per cent subsidiary of the Airports Authority of India and Invest India, India’s national investment promotion and facilitation agency, under the Ministry of Commerce and Industry. I

The Krishi UDAN 2.0 will be implemented at 53 airports across the country mainly focusing on Northeast and tribal regions and is likely to benefit farmers, freight forwarders and airlines. The Ministry of Civil Aviation plans to be pilot the scheme for six months, and, will introduce amendments based on the results of the evaluation and consultations with other stakeholders.

Facilitating and incentivising movement of agri-produce by air transportation: Full waiver of landing, parking, TNLC and RNFC charges for Indian freighters and P2C at selected airports of Airport Authority of India, primarily focusing on northeastern region, hilly and tribal regions.

Strengthening cargo-related infrastructure at airports and off airports: Facilitating the development of a hub and spoke model and a freight grid. Airside transit and transhipment infrastructure will be created at Bagdogra and Guwahati, Leh, Srinagar, Nagpur, Nashik, Ranchi, and Raipur airports as a part of focus on NER, tribal and hilly districts.

Concessions sought from other bodies: Seek support and encourage states to reduce Sales Tax to 1 per cent on ATF for freighters / P2C aircraft as extended in UDAN flights.

Resources-pooling through establishing convergence mechanism: Collaboration with other government departments and regulatory bodies to provide freight forwarders, airlines and other stakeholders with incentives and concessions to enhance air transportation of agri-produce.

Technological convergence: Development of E-KUSHAL (Krishi UDAN for Sustainable Holistic Agri-Logistics). Platform to be developed to facilitate information dissemination to all the stakeholders. Furthermore, integration of E-KUSHAL with e-National Agriculture Market (e-NAM) is proposed.

You may also like to read: ADB, India sign $100 million loan agreement for agribusiness development in Maharashtra

Total 53 airports have been selected for the first phase of Krishi UDAN 2.0. – the majority of them are operated by AAI.

The strategic selection of the airports is primarily focused on the northeast region. Additionally covers the north, entire western coast and southern India, including two islands.

Airports for implementation of Krishi Udan 2.0 are selected with the aim of providing benefit to the entire country. Opted airports will provide access to the regional domestic market and will also connect them to international gateways of the country.