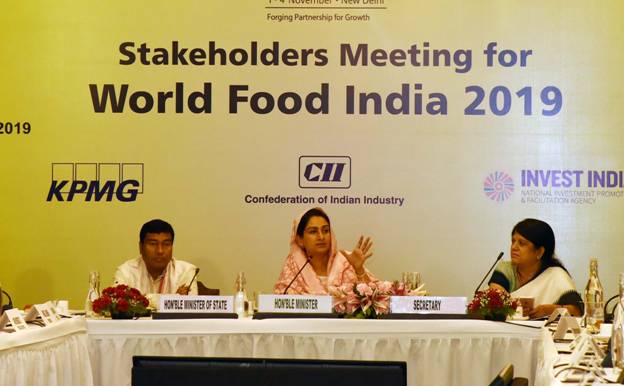 World Food India 2019 will be held from 1-4th November 2019 in New Delhi and will position India as food processing destination of the world. It will be the biggest gathering of all global and domestic stakeholders in food processing sector, Union Minister for Food Processing Industries Harsimrat Kaur Badal said in New Delhi Monday.

The minister chaired a meeting with various stakeholders of WFI 2019 including the associated ministries and departments, CEOs of major food processing companies and industry associations. This was followed by a second meeting with the ambassadors and high commissioners of leading food processing and food retailing countries. The meetings were held to discuss the investment opportunities available in India in the food processing sector and to sensitise the gathering about their participation in WFI 2019.

Badal informed the gathering that the second edition of World Food India is planned at a much bigger and grandeur level at Vigyan Bhawan and Rajpath Lawns in New Delhi. World Food India 2019 shall consist of several top level seminars, investment opportunities, exhibitions, high level CEO roundtables, country sessions, B2B and B2G networking etc. For the year 2019, the ministry is targeting to partner with at least 15 countries and participation from at least 80 countries. The tagline of the event will be “Forging Partnerships for Growth”.

She informed that preparations for World Food India 2019 have already begun. More than 11 international and eight domestic roadshows are planned. The roundtable with all top CEOs and ambassadors was one such high level event showcasing the intent of the ministry to engage with industry- domestic and global. In the next few months, the ministry will reach out to all the states and other players in Industry in particularly the MSMEs. The minister also invited suggestions from the industry on the 4-day event.

The event has already received interests from several countries and industries interested to becoming part of the event. The minister invited the ambassadors and industries to be a part of this mega celebration of food and witness the immense opportunity that India provides for growth and prosperity.

Addressing the gathering the minister said, “Food processing is one of the six superstar sectors under the Government of India’s Make in India initiative and has the potential to transform India as a leading food processing destination of the world.” She added that food processing is critical to achieving the Prime Minister’s vision of doubling the farmers’ income in India and reducing food wastage and that the ministry is making several efforts to ensure that this vision is realised.

The minister said that Indian food processing industry has grown tremendously recording 11 percent growth rate, which is twice the pace of global industry. The sector has recorded double digit growth rate across all major sub-segments of the sectors both in terms of value and volume.

The minister informed that despite huge domestic market of 1.3 billion customers with the youngest population globally and an abundant agricultural base, the processing levels in India remain low at 7.7percent behind several economies such as China, Malaysia and US. India’s share in global exports of processed food is only 2 percent. Besides, India also has a high share of harvest and post-harvest losses from major agricultural produces on account of poor storage, transportation and logistics to the extent of Rs 92,651 crore (US$13 billion), 3 times the agricultural budget.