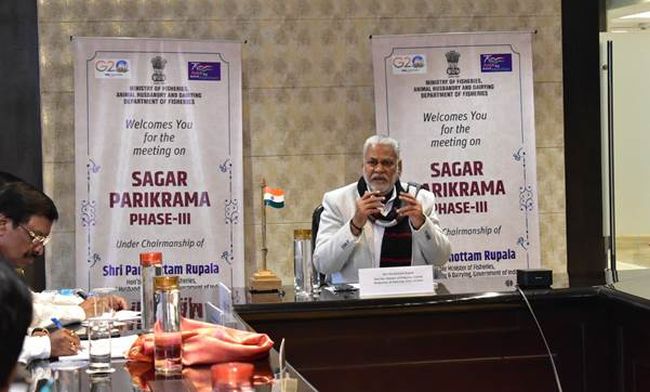 Sagar Parikrama aims to facilitate interaction with fishermen, coastal communities and stakeholders so as to disseminate information on various fisheries-related schemes and programmes being implemented by the government

The Department of Fisheries (DoF), Ministry of Fisheries, Animal Husbandry and Dairying, Government of India (GoI) has launched the ‘Sagar Parikrama’ programme on the occasion of 75th Azadi Ka Amrit Mahotsav. The Sagar Parikrama programme is being organised through a pre-decided sea route covering coastal states and union territories.

DoF, under the chairmanship of Parshottam Rupala, Union Minster of Fisheries, Animal Husbandry and Dairying (MoFAH&D), Government of India, organised the planning meeting for ‘Sagar Parikrama’ Phase III in New Delhi. Joint Secretary (Marine Fisheries), DoF GoI, welcomed all participants and set the agenda for the meeting while Secretary, DoF GoI, summarised the last two programmes and highlighted that key activities such as completion and upgradation of harbours and promotion of artificial reefs should be promoted amongst fishermen communities.

The union minister launched the Marathi version of the “Sagar Parikrama Song”. Further, he thanked all participants for joining the meeting, sharing their thoughts and determine to make the programme a success.

You may also like to read: Dialogue on ‘Sustainable Fisheries, Aquaculture and Climate Change’ held at Indian Science Congress

Phase III programme of ‘Sagar Parikrama’ is being organised in the state of Maharashtra and a tentative plan was proposed by the state officials. The programme locations and dates were deliberated upon by the officials as per weather suitability and other influencing factors. Plausible options for locations to hold rallies, site visits and house visits were discussed. The state officials also put forth on-ground challenges that they may be posed during the preparation of the programme for discussion and guidance by the leadership.

Further, the representatives from the fishing communities were invited to put forward their points for discussion and deliberation. A few points that were discussed were the state’s request for subsidy on diesel for deep-sea fish folks to make deep-sea fishing economical, action with regards to fish folks caught by the neighbouring countries during deep-sea fishing, completion of Mirkarwada phase II and Anganwadi harbour, ensure ration and insurance benefits to cover more beneficiaries during the non-fishing period.

You may also like to read: Government interventions improving inland fisheries and aquaculture in India

This is a planning meeting that aimed to kick-start the event planning along with understanding on-ground challenges and stakeholder expectations. He advised all the officials and participants present that beneficiary connect should be at the core of meetings and activities planned during the event. The interactions aim to resolve the issues of the fishers and other stakeholders and facilitate their economic upliftment through various fisheries schemes and programmes being implemented by the Government of India such as ‘Pradhan Mantri Matsya Sampada Yojana’ (PMMSY), Kisan Credit Cards (KCC) and Fisheries and Aquaculture Infrastructure Development Fund (FAIDF). It was highlighted by the minister that while all schemes have been important however creating awareness about KCC amongst fishermen folks has been a key agenda point during his Sagar Parikrama visits and shall remain the same.

Sagar Parikrama aims to (i) facilitate interaction with fishermen, coastal communities and stakeholders so as to disseminate information on various fisheries-related schemes and programmes being implemented by the government, (ii) demonstrating solidarity with all fisher folk, fish farmers and concerned stakeholders as a spirit of Aatmanirbhar Bharat (iii) promote responsible fisheries with focus on the sustainable balance between the utilisation of marine fisheries resources for food security of nation and livelihoods of coastal fisher communities, and (iv) protection of marine ecosystems. ‘Sagar Parikrama’ programme envisages covering the maritime states and UTs in a phased manner. 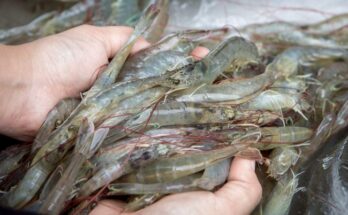