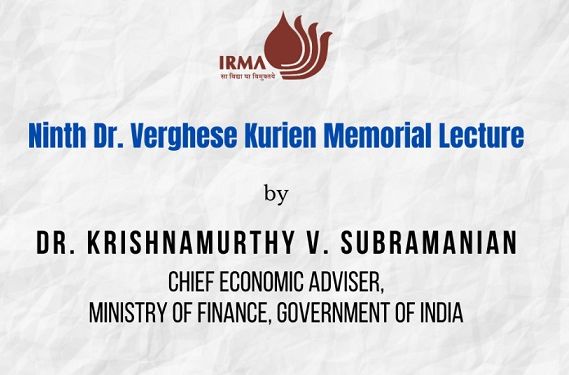 Over the last four decades, IRMA has striven to live up to the ideals of its founding father Dr. Kurien and today more than 60 percent of the 3,000 odd IRMA alumni are working in organisations serving rural and allied sectors

In his address, Dr. Subramanian expressed his optimism regarding the Indian banking sector and that the sector would grow leaps and bounds in proportion to the Indian economy. He emphasised on the importance of the next five decades for the Indian economy and how learning from the past is imperative for growth in the future. This, in his opinion, has become even more critical with the impact of the COVID-19 pandemic still being felt across the world. The banking sector, he said, needs to seize opportunities in order to complement the vision of making India a US$5 trillion economy, particularly with the advent of fintech and rapid digitisation.

Speaking on the occasion, Dilip Rath, Chairman, Institute of Rural Management Anand, said that over the last four decades, IRMA had striven to live up to the ideals of its founding father Dr. Kurien and today more than 60 percent of the 3,000 odd IRMA alumni are working in organisations serving rural and allied sectors. He further said that institutions are known to be synonymous with the people who had built them and nowhere is this more apparent than in IRMA. Calling Dr. Kurien a visionary and innovator, Rath emphasised on how the institutions built by Dr. Kurien, like IRMA, National Dairy Development Board (NDDB), Gujarat Cooperative Milk Marketing Federation (GCMMF), popularly known as Amul, among others, have stood the test of time, paving the way for the transformation of rural India.