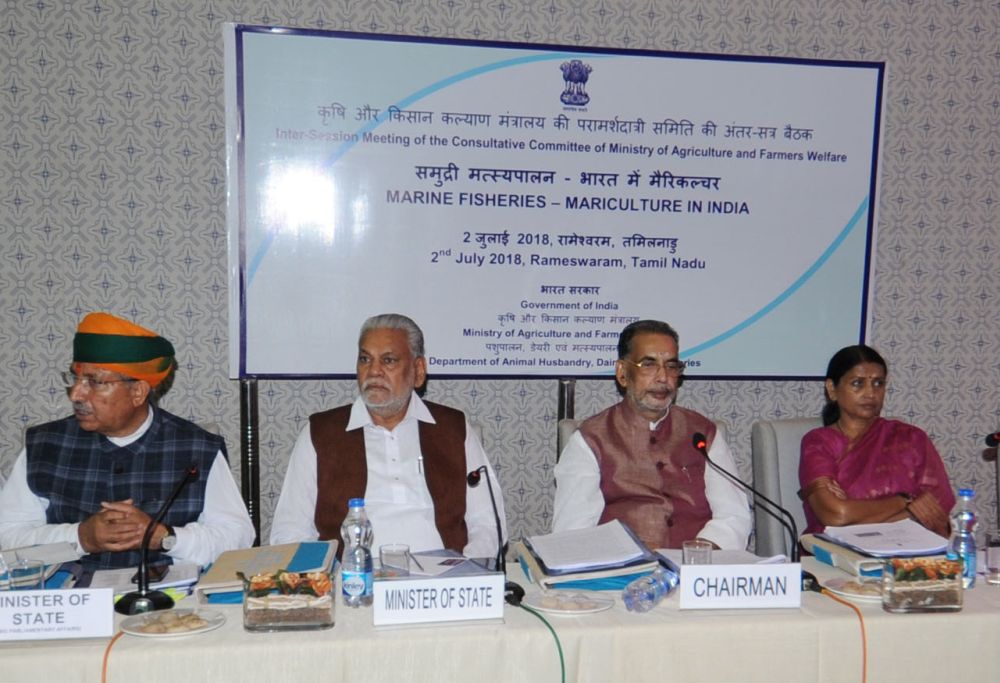 Traditional fishermen, their associations and self-help groups being provided with central financial assistance of up to Rs 40 lakh for Deep-Sea Fishing Vessels

The Ministry of Agriculture and Farmers’ Welfare has notified the “National Policy on Marine Fisheries, 2017”, which will guide the development of marine fisheries sector for the next 10 years. Union Agriculture and Farmers’ Welfare Minister Radha Mohan Singh said this at the inter-session meeting of the consultative committee of the Ministry of Agriculture and Farmers’ Welfare on “Marine Fisheries-Mariculture in India” in Rameswaram, Tamil Nadu Monday.
The Agriculture Minister informed that the government has also included a sub-component namely, ‘Assistance for Deep-Sea Fishing’ under ‘Blue-Revolution’. Under this scheme, traditional fishermen, their associations and organisations or self-help groups are provided with central financial assistance upto 50 percent of the cost of the vessels i.e. Rs 40 lakh for ‘Deep-Sea Fishing Vessels’. For implementation of this scheme, Rs 312 crore of central share has been released in the first year (2017-18) to benefit the traditional fishermen of the country.
He further said that fish production in India is estimated at 11.4 million tonnes, out of which 68 percent is registered from inland fisheries sector and the remaining 32 percent from marine sector. It is expected that the indigenous fish requirement by 2020 would be 15 million tonnes as against the production of 11.4 million tonnes. This gap of 3.62 million tonnes is expected to be made up by Inland Aquaculture and also through mariculture.
Estimates by scientists say that the fishery resources of near-shore waters within the 200 meters depth zone are either optimally utilised or sometimes over-exploited, which is a matter of serious concerns for the livelihood of traditional fishermen, he added. In this context, a meeting was held on May 17, 2018 with the Fisheries Ministers of all coastal states and union territories to discuss the issues relating to “Marine Fisheries”. In this meeting, all the coastal states have been called upon to adopt necessary reforms towards responsible and sustainable fisheries.
The Minister said, considering the negligible opportunities of additional fish production from the near shore area, the government has decided to promote ‘marine culture fisheries’ and included the sub-components of ‘Mariculture’ under ‘Blue Revolution’ scheme. Open sea cage farming is one of the eco-friendly farming activities under mariculture which is being practiced in open sea where wave action is less. The fishes that are being cultured in cages are high value fishes; hence there is a huge export demand for cage cultured fishes.
He informed that the National Fisheries Development Board (NFDB), Hyderabad which functions under the Ministry, has provided financial assistance of Rs 114.73 lakh to the Central Marine Fisheries Research Institute (CMFRI) in 2011 for implementation of a technology upgradation project on demonstration of open sea cage farming in 14 locations along the coasts of almost all maritime states on pilot basis. Based on the successful implementation and outcome of the pilot projects, it was recommended that open sea cage farming be established across the country.
Agriculture Minister concluded by saying that the Department of Animal Husbandry, Dairying & Fisheries (DADF) has formulated a document on Mission Mariculture-2022 with the main objective of enhancing fish production from marine sector. It is proposed to promote mariculture including open sea cage culture activity in all maritime states and UTs on priority basis with the active participation of maritime states and UTs and fishers.