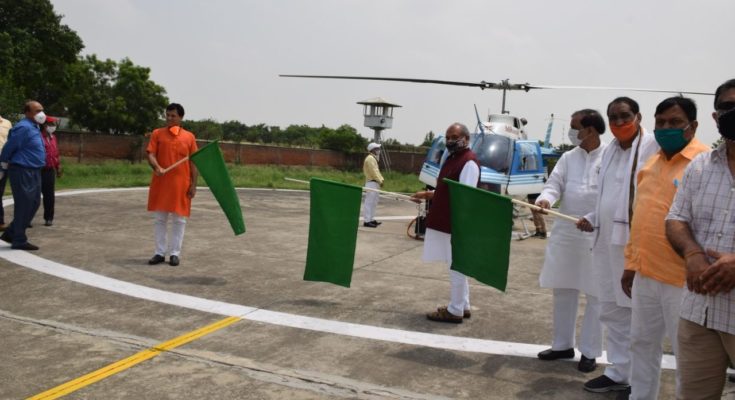 The Bell 206-B3 helicopter will have single pilot operation, has a pesticide carrying capacity of 250 litres in one trip and can cover about 25 to 50 hectare area in one flight.

Union Agriculture & Farmers’ Welfare Minister Narendra Singh Tomar today flagged off a Bell Helicopter with spray equipment from a helipad facility at Gautam Buddh Nagar, Greater Noida, Uttar Pradesh. The helicopter will fly for Air Force Station at Uttarlai, Barmer where it will be stationed initially and from there deployed for locust control in desert areas of Barmer, Jaisalmer, Bikaner, Jodhpur and Nagaur. The Bell 206-B3 helicopter will have single pilot operation, has a pesticide carrying capacity of 250 litres in one trip and can cover about 25 to 50 hectare area in one flight. An empowered committee finalised the firm for deploying one helicopter for aerial spray in desert area after getting all the clearances from Directorate General of Civil Aviation (DGCA) and Ministry of Civil Aviation.

Later, interacting with the media, Tomar said that after a long gap of 26 years, last year locust attack took place. Government of India and state governments worked in coordination to effectively control it. It was estimated that this year there would be greater locust problem, but government is in full preparedness and all the state governments have been alerted and are working in close coordination with the Centre. Deployment of machines, vehicles and manpower has been increased and concerned states are utilising SDRF funds to tackle the problem. Drones have been used for locust control and today aerial spraying of insecticides with the use of helicopter has also been launched. He expressed gratitude to Ministry of Civil Aviation for enabling the deployment of drones and helicopter. Tomar informed that order has been placed for 5 aerial spraying machines from a UK-based company, and once these are received, they will be deployed in IAF helicopters and pressed into operation for locust control.

On the recommendation of the empowered committee, for effective control of locusts settling on tall trees and inaccessible areas, Department of Agriculture, Cooperation and Farmers’ Welfare (DAC&FW) engaged 5 companies to provide services of drones for locust control at 5 drones per company. Till now 12 drones have been deployed for locust control in Jaisalmer, Barmer, Jodhpur, Bikaner and Nagaur. Use of drones has added one additional dimension as it is effective for tall trees and inaccessible areas. One drone can cover 16-17 hectare area in one hour and in 4 hours it can cover upto 70 hectare area. MoCA has further relaxed the terms and conditions of the conditional exemption granted for drone in anti-locust operations and permitted the use of engine-powered drones upto 50kg and use of drones during night times also for anti locust operations.

State governments undertake control operations deploying tractor mounted sprayers and fire tender vehicles. Starting from April 11, 2020 till June 28, 2020, control operations have been done in 233,487 hectares in the states of Rajasthan, Madhya Pradesh, Punjab, Gujarat, Uttar Pradesh, Maharashtra Chhattisgarh, Haryana and Bihar. No significant crop losses have been reported in the States of Gujarat.