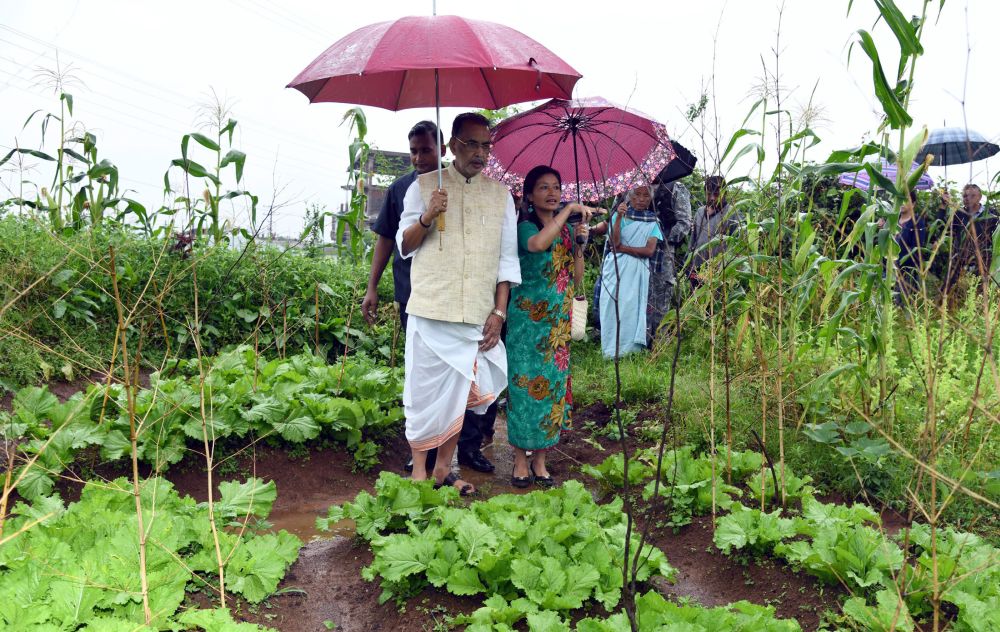 Organic farming has been developed in 40,000 hectares of land in the state

Union Minister for Agriculture & Farmers Welfare Radha Mohan Singh visited Lawsohtun organic farm in Shillong Sunday. The four hectare farmland which belongs to Lawsohtun Farmers Association is being maintained by 20 household. The minister interacted with the farmers at the site and appreciated the efforts work of the farmers for practicing organic farming. He also encouraged them to expand their practice of organic farming to more lands. The minister asked the state government officials to extend all possible assistance to farmers in this regard. The minister also assured full support from the Central government towards promoting organic farming in the state.
The Union Minister also reviewed the activities of the Department of Agriculture, Animal Husbandry, Veterinary and allied sectors with the officials of the departments at Raj Bhawan Saturday evening. The minister reviewed in details the implementation of all the welfare centric schemes of the government under his ministry, in Meghalaya. He instructed all the officials of the department to ensure that the schemes which are meant for the welfare of the farmers are delivered to the last point and within specified time frame.
The minister was categorical when he exhorted all the officials to submit utilisation certificate of funds to the centre on time so that there is no delay in the flow of funds from the Centre.
The minister also asked the officials to invest more resources towards practicing and promoting organic farming in the state. In response to his query on the efforts of the state government in this, the officials of the state informed the minister that the state has developed organic farming in 40,000 hectares of land, covering all the districts and that this practice would complete three years on March 2019. This will enable the state to get the necessary certification for the products of these lands as organic products.