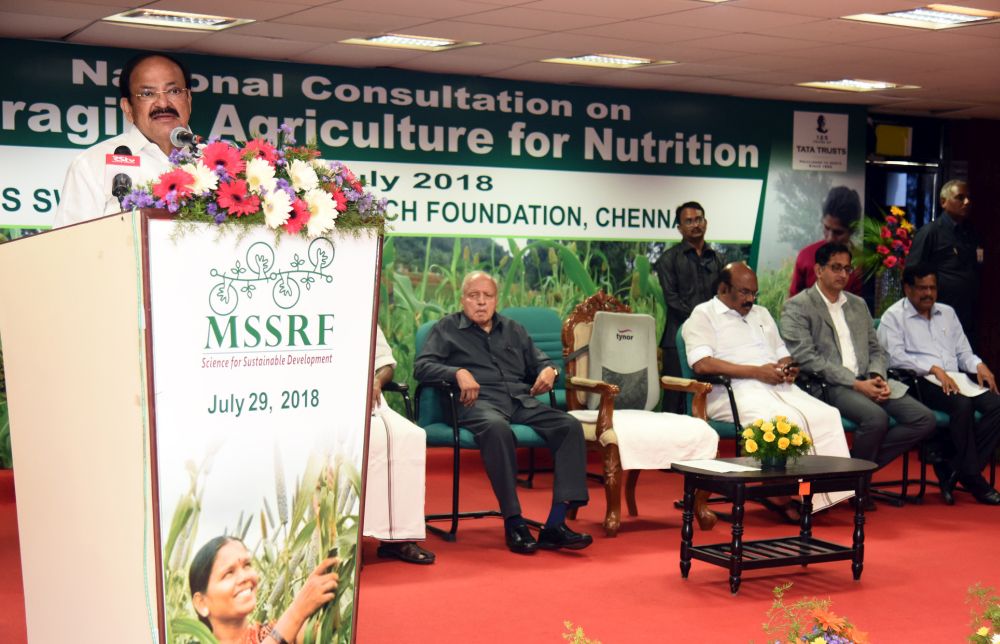 Vice President of India, M. Venkaiah Naidu has said that government, civil society, scientists and researchers must share knowledge and expertise with farmers to make agriculture sustainable and nutrition-rich

Vice President of India, M. Venkaiah Naidu has said that government, civil society, scientists and researchers must share knowledge and expertise with farmers to make agriculture sustainable and nutrition-rich. Addressing the National Consultation on Leveraging Agriculture for Nutrition organised by MS Swaminathan Research Foundation (MSSRF), in Chennai Sunday, he called on institutions like Indian Council of Agricultural Research (ICAR) and Krishi Vigyan Kendras to take the lead in educating farmers. The Minister for Fisheries and Personnel and Administrative Reforms, Tamil Nadu, D. Jayakumar, the prominent agriculture scientist, Prof. MS Swaminathan and other dignitaries were present on the occasion.
The Vice President said that a considerable section of the population in our country suffers from malnutrition consisting of under nutrition, hidden hunger caused by micronutrient deficiencies and obesity. He further said that it is quite distressing that in spite of the efforts taken by successive governments at the Centre and in various states, the problem of malnutrition persists in India at unacceptable levels. There is a need to address this problem on war footing for the country’s population to remain healthy and productive in future, he added.
The Vice President said that the Government of India has adopted The National Nutrition Strategy in September 2017 to address the problem. He further said this policy recognises the imperative need to have a relook at our agriculture policy. We must make agriculture nutrition-sensitive and it is critical that we explicitly make this vital connection between agriculture and nutrition.
Naidu said Indian agriculture must diversify our food production by moving away from mono cropping of major cereals to a system that integrates a variety of food items including small millets, pulses, fruits and vegetables. He further said that pulses cultivation will not only help in improving nutrient rich food production but also in restoring nutrient value to the soil. On the economic side, it will reduce our import burden as nearly six million tones of pulses are being imported.
The Vice President said that millets like jowar, bajra, ragi and little millets like kutki, kodo, sawa, kangni and cheena are known to be nutrient-rich. Since cultivation of millets requires less water, efforts must be to promote their cultivation as part of crop rotation, he added.
Stressing on the need to create a market for nutritionally-rich crops, such as millets, the Vice President said promoting or supplying them through the Public Distribution System can be a good option. He called on scientists and people researching on agriculture to create more awareness among the people, about the nutritional value of different foods so that they are able to make informed decisions. Regular monitoring of dietary consumption data of our population could help the government to initiate suitable modifications in policies from time to time, he added.
The Vice President lauded the efforts of Prof. MS Swaminathan for conceptualising and promoting the Farming System for Nutrition (FSN) to tackle household food and nutrition insecurity in rural India. He further said that the concept of FSN is a sustainable framework of farming and it involves crops, farm animals and fish. It calls for the integration of interventions in non-farm factors like hygiene and sanitation to improve nutrition and it addresses different human nutritional needs across gender and age groups through the life cycle, he added.
The Vice President said that in accordance with the suggestion given by Prof MS Swaminathan for a synergetic approach to integrate agriculture, nutrition and health, the National Nutrition Strategy, 2017 of Government of India, recognises the importance of a multi-dimensional approach to address malnutrition.