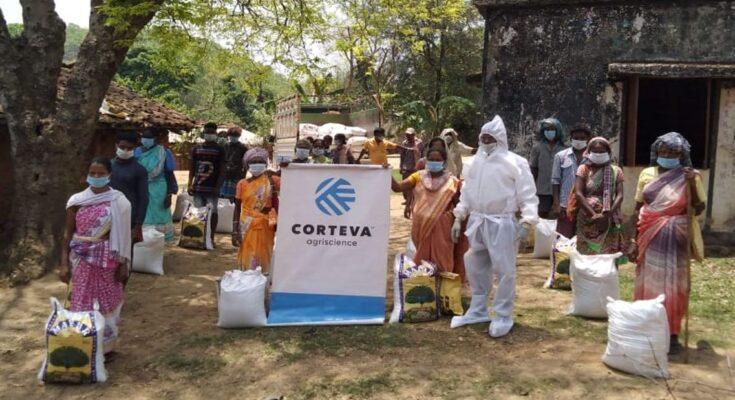 Through partnerships with non-government organisations such as PRADAN, Sewa Bharati and CHD Group, Corteva, has claimed to have supported over 200,000 plus beneficiaries during the last few months

Keeping in line with its sustainability goal to help the farming communities thrive, global agriculture company, Corteva Agriscience has partnered with local governments and non-profit organisations in India to ensure the health and safety of farmers during the pandemic.

Through partnerships with non-government organisations such as PRADAN, Sewa Bharati and CHD Group, Corteva, has claimed to have supported over 200,000 plus beneficiaries during the last few months.

According to Corteva, over 16 lakh personal protective equipment (PPE) was produced and distributed to farmers across 220 villages. PPE production units were set up in the vulnerable communities of Jharkhand and Bihar, providing temporary employment to women farmers.

Highlighting the initiative, Dr. Aruna Rachakonda, Marketing Director, Corteva Agriscience™, South Asia, said, “We’re committed to enriching the lives of those who produce. Our long-term goal is to improve farmers’ livelihoods and operations while conserving resources and sustaining the land. As these farmers were not able to step out to tend to their fields, demand and supply frameworks were being challenged. Our initiative was targeted to help smallholder farmers and migrant workers resume work, while staying safe.”

The company also supported farmers and their families in these regions by providing two meals every day for two months. A total of 145,000 kg of food was distributed in the survival kits that included other hygiene essentials – supporting migrant workers.

Corteva formed multiple district and block level WhatsApp groups through which volunteers kept in touch with the communities for new updates and information sharing. Through these WhatsApp groups, the communities received updated information around lockdown rules, special transport arrangements and government care package distribution. The volunteers also supervised sanitation and transportation of farm products till market yard and undertook health monitoring initiatives in seed and research farms in about 20 villages, through public health outbreak surveillance methodology, the company has informed.