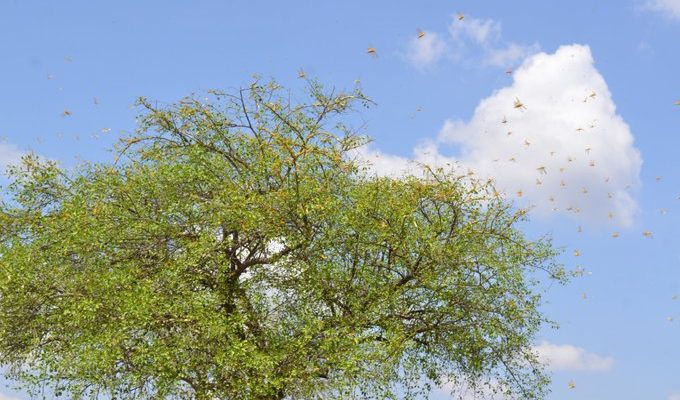 Currently, 60 control teams with spray vehicles, over 200 Central government personnel, five companies with 12 drones are deployed for spraying of pesticides

In order to check the menace of locust attacks harming the standing crops in the farmers’ fields, locust control operations have been done in 132,777 hectares area in states of Rajasthan, Madhya Pradesh, Punjab, Gujarat, Uttar Pradesh and Haryana by Locust Circle Offices (LCOs) starting from April 11, 2020 till July 2, 2020. In the intervening night of 2nd – 3rd July, 2020, control operations were carried out at 19 places in seven districts such as Jaisalmer, Barmer, Jodhpur, Nagaur, Sikar, Jaipur, and Alwar of Rajasthan and two places in Tikamgarh district of Madhya Pradesh by LCOs, Union Ministry of Agriculture and Farmers Welfare has said in press release.

State governments have also been simultaneously carrying out locust control operations. Till July 2, 2020, control operations have been done in 113,003 hectares area in Rajasthan, Madhya Pradesh, Punjab, Gujarat, Uttar Pradesh, Maharashtra, Chhattisgarh, Haryana and Bihar by respective state governments. State agriculture department of Rajasthan carried out control operations at 4 places in Karauli, Sawai Madhopur, Pali, and Dholpur districts in the intervening night of 2nd and 3rd July, 2020 against small groups and scattered population of locusts, the press statement has mentioned.

Currently, 60 control teams with spray vehicles are deployed in state of Rajasthan, Gujarat, Madhya Pradesh and Uttar Pradesh; more than 200 Central government personnel are engaged in locust control operations. Further, five companies with 12 drones are deployed in Barmer, Jaisalmer, Bikaner, Nagaur and Phalodi in Rajasthan for effective control of locusts on tall trees and in inaccessible areas through spraying of pesticides, the statement has further informed.

Swarms of immature pink and adult yellow locusts were active in Jaisalmer, Barmer, Jodhpur, Nagaur, Sikar, Jaipur, and Alwar districts of Rajasthan and Tikamgarh area of Madhya Pradesh on Friday.

As per the Food and Agriculture Organization’s Locust Status Update of June 27, 2020, swarms from Somalia are likely to migrate to the summer breeding areas along the India-Pakistan border. In Pakistan, some swarms have started laying eggs in southeast Sindh near the Indian border while swarms hopper bands are forming in Khyber Pakhtunkhwa. In India, some small groups of immature adults which are moved in eastern parts of Utter Pradesh are likely to disperse without causing much harm.