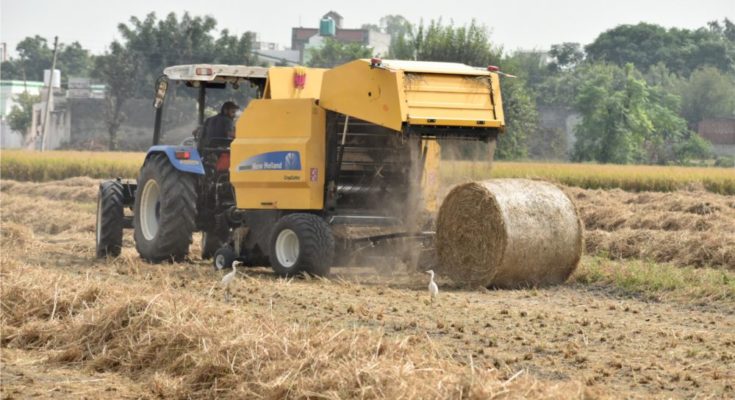 The critical issues surrounding air pollution in northern India and New Delhi in recent weeks have shed further light on the need for immediate action to preserve air quality. Initiatives led by New Holland Agriculture and its parent company, CNH Industrial, are demonstrating that straw management techniques could help solve some of the severe air pollution problems afflicting large parts of the country.

Setting fire to crop residues creates a thick blanket of smog which drifts with the wind and is poisoned by a mix of particulate matter, carbon dioxide, nitrogen dioxide, and sulphur dioxide. In Delhi, this November, levels of toxic particles reached more than 10 times safe limits. Some of this pollution comes from industry and vehicles, but most of it from burning paddy straw. It is a vast problem because Indian farms create more than 620 million tonnes of crop residue every year and more than 90 percent of the nation’s paddy straw is burnt in fields.

The widespread practice of crop burning has the additional disadvantage of preventing nutrients from crop residues naturally enriching the soil. To compensate for this, farmers use chemical fertilisers, which increases cultivation costs and causes further environmental damage when agrochemicals evaporate into the air or leak into groundwater reservoirs.

Stubble burning has intensified in recent years due to little time available between harvesting one crop and sowing the next. Taking a different approach to straw management, however, could allow this fast crop-turnaround to be achieved at the same time as eradicating the need for crop burning. This is being demonstrated by two pioneering straw management campaigns in Punjab and Haryana, and both made possible by New Holland Agriculture supplying farmers with specialist machinery and training.

Huge potential to improve air quality and power rural homes
The first of the two straw management projects supported by New Holland Agriculture was started in October 2017 in Kallar Majri in Patiala district, Punjab. Farmers here slashed, collected and baled the paddy straw and stubble and sold it to the local biomass plant to generate electricity for nearby rural communities.

New Holland demonstrated to farmers the easy three-step process for doing this. In the first step, after harvesting, the stubble is cut to ground level using a rotary slasher. In the second step, the New Holland RKG 129 gyro rake is used to pack the crop residue into windrows. And in the third step, the straw is turned into bales by the New Holland BC5060 small square baler.

The RKG 129 gyro rake has an adjustable 3.5-meter width, nine tine arms, and three 64-centimetre-long tines per arm. The rake’s low power requirement of just 35 to 40HP makes it suitable even for small farms. The BC5060 baler has a 1.8-meter pickup which is ideal for small lanes and for passing through narrow gateways. The swift and clean pickup action of this machine assures high-quality bale formation, producing equal bales which are consistently dense, easy to handle and stack, and which keep their shape over long periods.

Also in October 2018, a second straw management project started at the request of the Department of Agriculture in Haryana. Here, too, the aim was to convert crop residue into an energy source, as well as animal feed and compost – and the results are again impressive. In the district of Panipat, 769 tonnes of paddy straw were baled, preventing 1,166 tonnes of CO₂ emissions, and in the district of Fatehabad, 327 tonnes of paddy straw were baled, preventing the emission of 496 tonnes of CO₂.

Sandeep Gupta, Business Head of Crop Solutions – New Holland, said, “New Holland balers are now preventing more than 1.5 million tonnes of crop residue from being burnt in India every year, as well as bringing additional income to farmers and clean energy to their communities. Each New Holland BC 5060 baler has the ability, in every paddy season, to bale enough straw to produce electricity for 950 rural homes for a whole year. This shows how the wider adoption of straw management could make a big, positive difference to India’s air quality.”