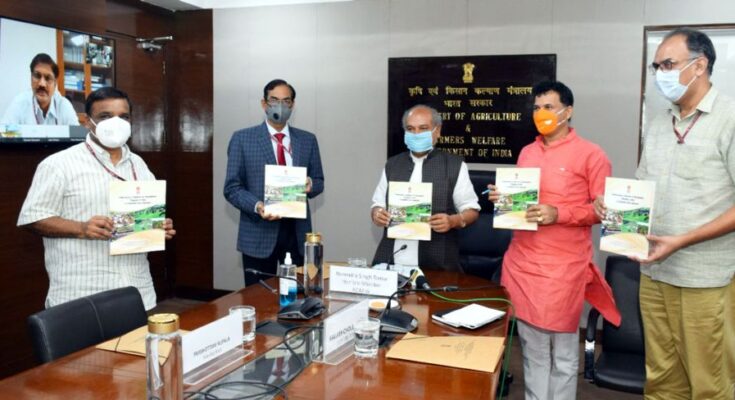 Union Minister of Agriculture and Farmers Welfare, Narendra Singh Tomar has congratulated farmers and state governments for record foodgrain production of 296.65 million tonnes in 2019-20 under unfavourable conditions imposed by Covid-19. The pulses and oilseed production is expected to be at 23.15 and 33.42 million tonnes respectively. Production of cotton is being estimated at 354.91 lakh bales with which India is set to rise to the first position in the world. This year has established a milestone in the history of Indian agriculture. Kharif sowing during this year up to September 11, 2020 has been 1,113 lakh hectares which is 46 lakh hectares more than normal sowing area. This provides good opportunity for ensuring food and nutritional security of the country. Tomar said that the farming community and state governments deserve special appreciation for this commendable achievement.

Addressing the National Conference for Rabi Campaign 2020 held today to review the progress of Kharif 2020-21 and plan for the Rabi season, Tomar said that Government is taking steps to strengthen agriculture infrastructure and economic condition of the farmers. Recently Agricultural Infrastructure Fund (AIF) scheme worth Rs 1 lakh crore for four years has been launched for creating facilities for cold storage, warehouse, packaging, ripening and waxing plants by agri-entrepreneurs, farmers’ association and local government agencies. Tentative allocation to the states have made been on the basis of total value of output of the state from agriculture and allied sectors. A 3 percent interest subvention will be given on bank interest, making loan with effective interest rate in the range of 5.0 to 5.5 percent. Formation of 10,000 farmer producer organisations (FPOs) is another such step to organise farmers in aggregation and marketing for higher returns. These will be registered under company or cooperative act and 15 percent will be constituted in Aspirational and Notified Tribal Areas.

The Union Agriculture Minister further elaborated that to improve agriculture sector, two bills relating to freedom of marketing to farmers have been passed in the Parliament. The Farmers’ Produce Trade and Commerce (Promotion & Facilitation) Bill 2020 and The Farmers (Empowerment and Protection) Agreement on Price Assurance and Farm Services Bill 2020 will give a boost to farmers engaged in agriculture and allied activities. Farmers will get freedom to sell their produce at different places. Government will continue the practice of procurement at Minimum Support Price (MSP) through existing network. These measures will attract large private investment leading to rapid development in agriculture and strengthening of rural economy.

Tomar said that Government of India had set the target of covering 100 lakh hectares in five years under micro-irrigation. A dedicated Micro Irrigation Fund (MIF) of Rs. 5,000 crore has been created with National Bank for Agriculture and Rural Development (NABARD) for expanding coverage of micro irrigation. In the year 2019-20, about 11 lakh farmers have benefitted by the adoption of drip and sprinkler irrigation system. During the last five years, an area of 47.92 lakh hectare has been covered under micro irrigation in the country which includes 11.72 lakh ha for the year 2019-20 which is a significant achievement.

India has three major growing seasons; Kharif, Rabi and Summer, for cultivating large number of cereal, pulse, oilseed and cash crops. Rabi is important cropping season contributing to more than half of crop productions. National conferences are held before every season to take stock of the preparedness and ensure timely availability of seed, fertilisers and other inputs. This time good rainfall has occurred and water reservoirs are full which offers good opportunity.