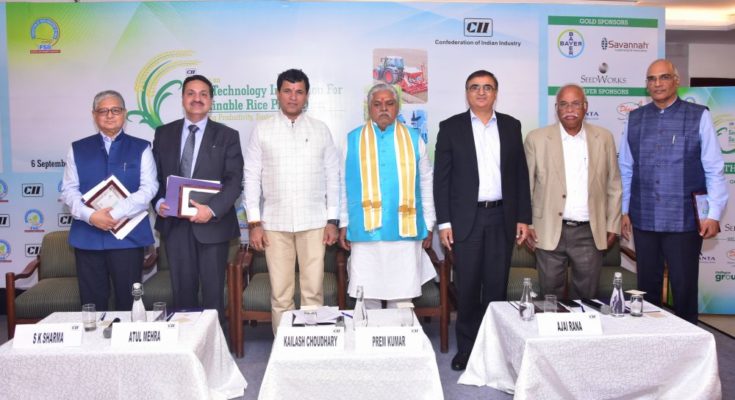 Minister of State for Agriculture, Kailash Choudhary emphasised on giving prominence to agriculture and redesigning image of farmers to inculcate a sense of self-dependence

Minister of State for Agriculture & Farmers Welfare, Government of India, Kailash Choudhary emphasised on giving prominence to agriculture and redesigning image of farmers to inculcate a sense of self-dependence to encourage more youth to adopt agricultural livelihood opportunities.” The minister was speaking at the CII Northern Region Seminar on Seed Technology Innovation for Sustainable Rice Production: Increasing Productivity, Sustainability and Profitability at New Delhi today. He emphasised on the spillover effects of agricultural progress on businesses.

Dr Prem Kumar, Agriculture Minister, Government of Bihar in his address said that “Bihar has huge opportunities for distribution of seeds for production of rice. The state is in the process of finalising State Seeds Policy which focuses on providing administrative and financial assistance through PPP model to private companies”,

He stressed on the importance of diversifying rice crop production to sustain in adverse climatic conditions. “Government of Bihar through its units and farmers recognised by Bihar State Seeds Corporation is able to supply only 65,000 quintals of seeds out of the 6.6 lakh quintals required. The balance supply is managed through the private sector”, he added. He apprised the audience that Bihar is encouraging farmers to sow seeds through Zero-Till Seed Drill Machine in uneven Gangetic delta plains.

The seminar was attended by over 120 delegates from government, academia and industry members from agriculture and allied sectors.