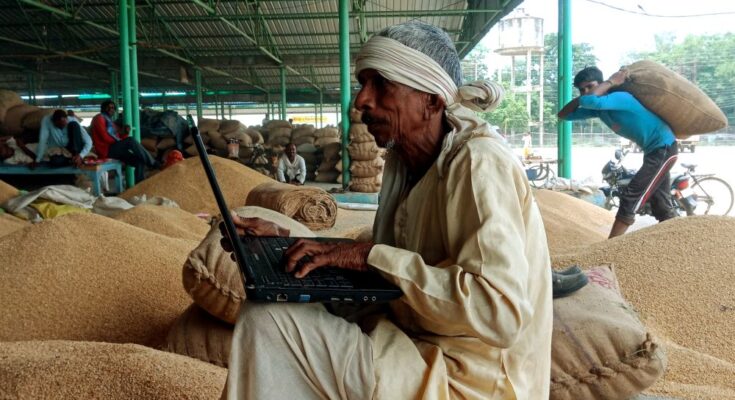 Initiated in 2015, e-National Agriculture Market, also known as e-NAM was an initiative in agricultural marketing to enhance farmers’ accessibility digitally to multiple numbers of markets and buyers and to bring transparency in trade transactions with the intent to improve price discovery mechanism, quality commensurate price realisation and also to develop the concept of “One Nation One Market” for agriculture produce.

Better market linkage was provided under e-NAM by Integrating 1,000 markets across 18 states and three union territories. So far, more than 1.69 crore farmers and 1.55 lakh traders registered on e-NAM platform. The online and transparent bidding system is encouraging farmers to increasingly trade on e-NAM platform. Total trade volume of 4.13 crore MT of bulk commodities and 3.68 crore numbers of coconut and bamboo worth approximately Rs 1.22 lakh crore has been recorded  on e-NAM platform. Direct payment to farmers was enabled in this platform, Ministry of Agriculture & Farmers Welfare has said in a press statement.

According to Agriculture Ministry, looking to the success of e-NAM in its 1,000 mandis, it is now on a path of expansion as announced by Finance Minister Nirmala Sitharaman in the Union Budget tabled on February 1, 2021, i.e to further integrate 1,000 more mandis with e-NAM, this will further strengthen the mandis.

During COVID-19, e-NAM platform /mobile app. has been further strengthened by launching FPO trading module in e-NAM where by farmer producer organisations (FPOs) can trade their produce from their collection centres without bringing the produce to Agricultural Produce Marketing Committees (APMCs). So far, 1,844 FPOs have been on board on e-NAM platform. Additionally, warehouse based trading module was also launched in e-NAM to facilitate trade from warehouses based on electronic-Negotiable Warehouse Receipt (e-NWR). To facilitate inter-mandi and inter-state trade at this juncture, enhanced version of logistic module has been released where by aggregators of transport logistic platform have on boarded which helps users to avail trackable transport facilities for transporting their produce. Further the e-NAM platform is made inter operable with Rashtriya e Market Services (ReMS) platform of Government of Karnataka which will facilitate farmers of either platforms were can sell their produce in other platform thereby increasing their market access, the ministry has said.

e-NAM is now developing as “Platforms of Platform” to create a digital ecosystem that leverage the expertise of individual platforms across various segments of agri value chain viz. developing and integrating service platform with e-NAM (QC services, transportation and delivery services, sorting and grading services, packaging services, insurance, trade finance, warehouses etc.), enabling the farmers to add value to their produce and facilitate them with ease of agri marketing, the statement reads.

e-NAM is not just a scheme but it’s a journey which aims to benefit the last mile farmer and transform the way they sell their agri produce. This intervention brings immense benefits to our farmers in augmenting their income by enabling them to realize competitive and remunerative prices in a transparent manner without incurring additional costs, the statement has noted.

Agriculture Post’s view
Initiated in 2015, it took five years to integrate 1,000 APMC mandis with e-NAM. The announcement of integrating additional 1,000 mandis has created a big question, how many years it would take to integrate these additional 1,000 mandis? It must not go the same way we did in the past. Rather, learning from the past, the Ministry of Agriculture along with all stakeholders must speed up the implementation of e-NAM and integrate these 1,000 additional mandis with e-NAM in minimum time so that its benefits reaches to the farmers. Otherwise, it would just be a budgetary announcement, fruiting nothing to the farming community.

Read more:  Is Govt really committed to welfare of farmers with a status quo Budget?