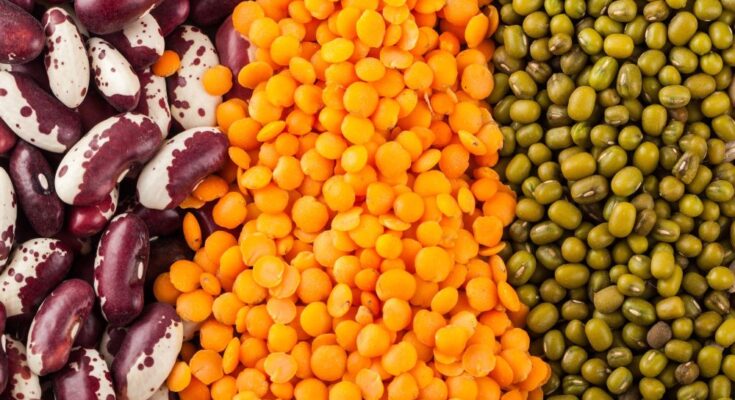 With an aim to attain self-sufficiency in the production of pulses, the Ministry of Agriculture and Farmers Welfare, Government of India has formulated a special Kharif strategy for implementation in the ensuing Kharif 2021 season. Through consultations with the state governments, a detailed plan for both area expansion and productivity enhancement for tur, moong and urad has been formulated. Under the strategy, utilising all the high yielding varieties (HYVs) of seeds that are available either with the Central seed agencies or in the states will be distributed free of costto increase area through inter-cropping and sole crop.

For the coming Kharif 2021, it is proposed to distribute 20,27,318 (almost 10 times more seed mini kits than 2020-21) amounting to Rs. 82.01 crore. The total cost for these mini-kits will be borne by the Government of India to boost the production and productivity of tur, moong and urad pulses.

The mini-kits will be given;

The above mini-kits used for intercropping and urad sole crop will cover an area of 4.05 lakh hectare in the Kharif season 2021 to be funded by the Central government. In addition to this, the usual programme of intercropping and area expansion by the states will continue on a sharing basis between the Centre and states.

For effective implementation of the Kharif mini kit programme, a massive outreach with the concerned district will be held both through a series of webinars by the Central government and state governments concerned to ensure that there are no hiccups. District level training programmes during the crop season will be organised through the District Agriculture Office and the ATMA (Agricultural Technology Management Agency) network for good agriculture practices and the use of new seeds in subsequent seasons as well. The Agricultural Technology Application Research Institutes (ATARIs) and Krishi Vigyan Kendras will also be roped in for effective implementation and training to the farmers.

The mini kits will be supplied by the Central and state agencies to the destination at the district level approved under the strategy by June 15, 2021 with the total cost of Rs 82.01 crore to be borne by the Central government. India is still importing around four lakh tonnes of tur, 0.6 lakh tonnes of moong and around 3 lakh tonnes of urad for meeting its demand. The special programme will increase the production and productivity of the three pulses of tur, moong and urad to a great extent and will play an important role in reducing the import burden and usher India to become Aatmanirbhar in the production of pulses.

From a meagre production of 14.76 million tonnes in 2007-08, the figure has now reached 24.42 million tonnes in 2020-2021 (2nd advance estimates) which is a phenomenal increase of 65 percent. This success is largely attributed to several significant interventions at the Central level. The Government has consistently been focussing on bringing new areas under pulses along with ensuring that productivity is also increased in the existing areas under cultivation. Therefore, the production and productivity of pulses must be further sustained and increased through the approach of both horizontal and vertical expansion.

From the year 2014-15, there has been a renewed focus on increasing the production of pulses through enhancing the budgetary outlays, focussing on special programmes in the different states/seasons, special action plans in low productivity districts, targeting rice fallow areas, technology transfer through the increased frontline and cluster demonstrations, diversified production approaches such as demonstrations on ridge-furrow, tur transplanting/ intercropping, tur on rice bunds, etc. Further, 119 of farmer producer organisations (FPOs) for pulses were also formed in 11 states for value addition, chain development and marketing. From 2016-17 onwards, under the National Food Security Mission, 644 districts have been included in the pulses programme.

However, the most significant input for increasing production and productivity has been the focus of providing quality seeds to the farmers. A major push towards this effort was made in 2016-17 with the creation of 150 pulses seed hubs in 24 states, covering Krishi Vigyan Kendras (KVK) in 97 districts, 46 state agricultural universities (SAU) and seven institutions of Indian Council of Agricultural Research (ICAR) to provide location-specific varieties and quality seed quantities. Along with this effort, breeder seed production centres’ infrastructure at 12 ICAR and SAU centres in eight states were created for increasing varietal and seed replacement.