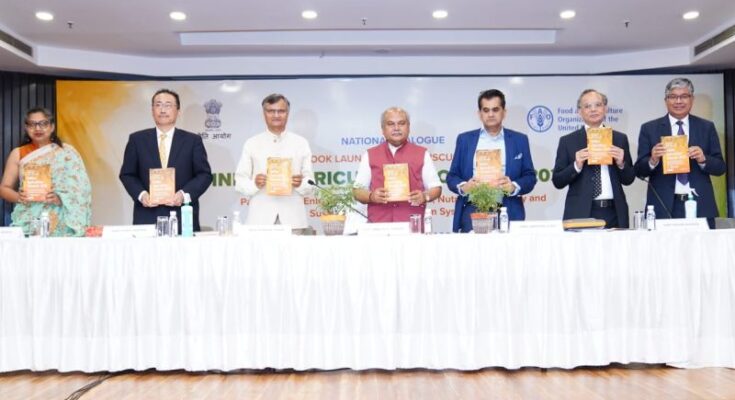 Published by Springer, Indian Agriculture Towards 2030 captures the outcomes of the deliberative process of a national dialogue by NITI Aayog and various the ministries of Government of India

Union Minister of Agriculture and Farmers’ Welfare (MoA&FW) Narendra Singh Tomar Monday released a book titled Indian Agriculture Towards 2030: Pathways for Enhancing Farmers’ Income, Nutritional Security and Sustainable Food and Farm Systems, at an event organised by NITI Aayog and the Food and Agriculture Organization of the United Nations. (FAO)

Published by Springer, Indian Agriculture Towards 2030 captures the outcomes of the deliberative process of national dialogue by NITI Aayog and the Ministries of Agriculture and Farmers’ Welfare; and Fisheries, Animal Husbandry and Dairying, and facilitated by FAO since 2019.

Congratulating NITI Aayog, FAO and MoA&FW officials, Union Minister Narendra Singh Tomar said, “With the efforts of all the stakeholders, including experts, the hard-working farmers, and agricultural scientists, we will be able to handle the challenges identified and take Indian agriculture and the country to new heights.”

The event was attended by several experts and economists from the agriculture sector, including NITI Aayog CEO Amitabh Kant and member Professor Ramesh Chand.

Professor Ramesh Chand, who is one of the editors of the book, said, “Considering the unprecedented challenges that agriculture is facing globally and in India, and the opportunities that exist, there is a need for a transformative vision for the next decade. Realising this need, a national dialogue was initiated to think through this transformation—what are its key elements and what it means for policy and practice. The areas that need special attention were identified through a collaborative process between NITI Aayog, MoA&FW and FAO under the overall guidance of a steering committee comprising agricultural experts.”

Themes covered by Indian Agriculture Towards 2030

The book includes a Foreword by the Vice President of India M. Venkaiah Naidu. It also has an Introduction by former FAO Representative in India Tomio Shichiri, under whose guidance this initiative was undertaken.

You may also like to read: World Pulses Day leverages the power of youth to transform agrifood systems

The national dialogue was organised from 19 to 22 January 2021. It sought to complement the government’s efforts in designing a post-green revolution future for the country, wherein agri-food systems can further nutritional targets, enhance livelihoods and safeguard human and ecological health.