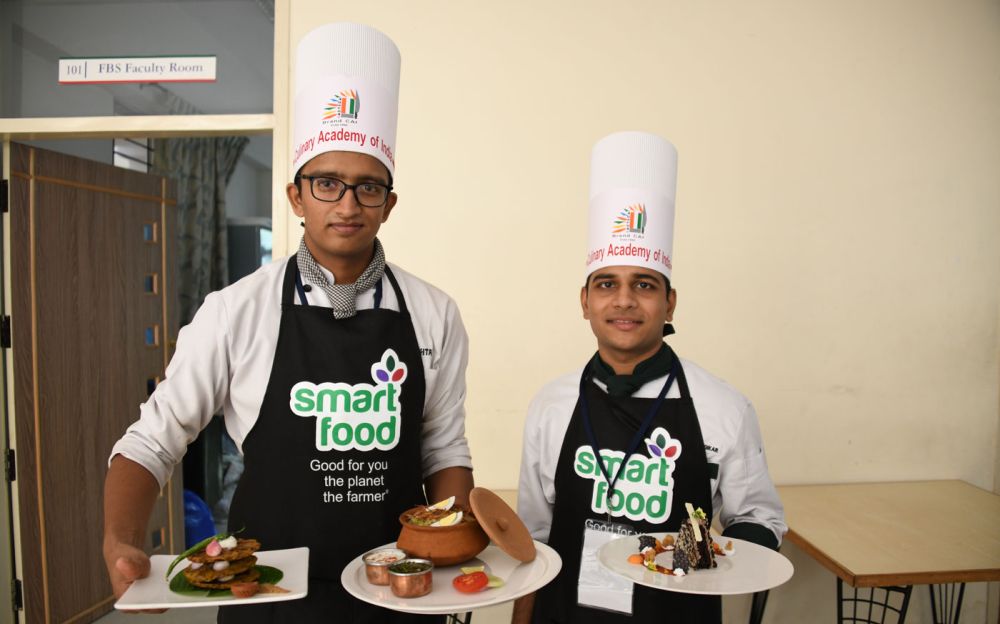 The Grand Finale of Smart Food Culinary Challenge will be held during ‘Organics & Millets 2019 – International Trade Fair’, in Bengaluru

Fourteen finalist young chefs from across India will fire up the burners to be crowned the country’s star Smart Food student chef. Paired as seven teams they will take on the challenge of pleasing the palate of celebrity judges and Smart Food experts at the Grand Finale of the Smart Food Culinary Challenge on 19 January 2019 in Bengaluru.
The Grand Finale will be held during the ‘Organics & Millets 2019 – International Trade Fair’, at the Palace Grounds, in Bengaluru, Saturday, 19 January 2019.
The competition kicked off with 28 teams from 16 culinary institutes across India conducted at MS Ramaiah University of Applied Sciences on December 5, 2018. Young chefs impressed the judges with three-course hearty meals with delicately spiced dishes — grilled veggies/meats, bright salads, freshly baked breads and soups.
The Smart Food Culinary Challenge will be the first-ever culinary ‘reality show for a cause’ in India. Boosting millets among the culinary community, the drama-documentary captures the journey of these student chefs in their attempts to bring innovative millet cuisines to the table.
Described by judges as crisp, light and fresh, the inspiring dishes by these chefs are all set to bring Smart Food into the circular of chefs and back to the tables across the country.
Skills of students of top culinary schools including the Institute of Hotel Management, Indian Institute of Hotel Management and Culinary Academy of India and the host institute MS Ramaiah University of Applied Sciences were put to test in both traditional to continental cuisine.
From foxtail millet-banana flower biryani to pearl millet ghevar, the dishes were judged by an eminent panel comprising Chef Ramaswamy Selvaraju, Vivanta by Taj, Chef Vinod K Batti – IKEA Food, Dr Anitha Seetha, Nutrition Scientist, ICRISAT, and Suchitra Muralidharan, celebrity Chef from Kannada cooking show Oggarane Dabbi (Spice Box). Celebrity Chef Ranveer Brar will also join the judging panel.
The panel selected the top seven dishes based on the appropriate use of millets, accompaniments, taste, portion size, the degree of complexity and overall garnishing and presentation style.
The International Crops Research Institute for the Semi-Arid Tropics (ICRISAT) and MS Ramaiah University of Applied Sciences have devised this Challenge and partnered with the Government of Karnataka to bring this to the masses.
The ‘Organics & Millets 2019 – International Trade Fair’ is being organised by the Department of Agriculture, Government of Karnataka, in collaboration with Karnataka State Agricultural Produce Processing and Export Corporation (KAPPEC) as the Nodal agency, International Competence Centre of Organic Agriculture (ICCOA) as the Knowledge Partner, and MCA as the Event Partner.
Smart Food is founded by ICRISAT and coordinated in India for millets, in collaboration with Indian Council of Agricultural Research (ICAR) – Indian Institute of Millets Research.