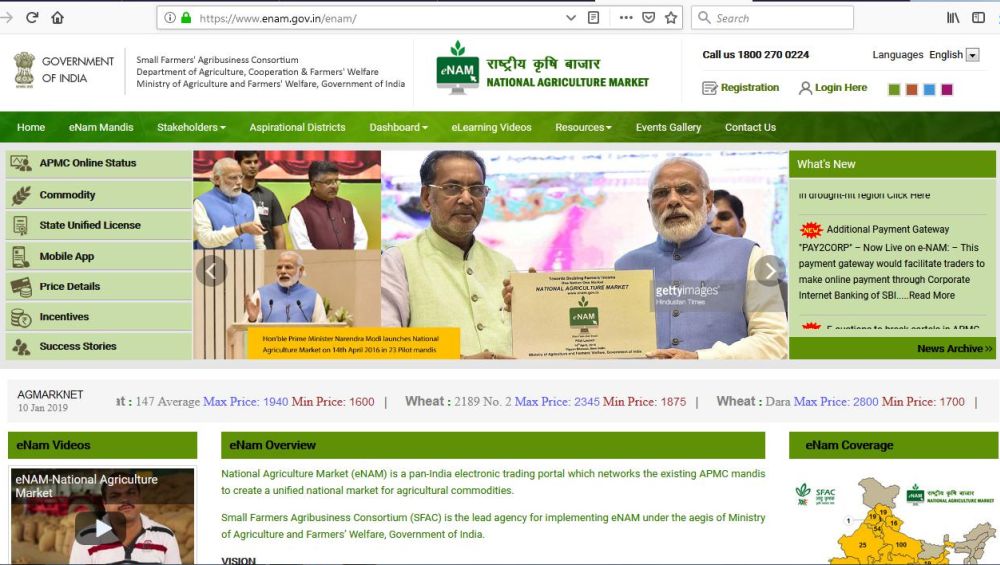 e-Payments have been made through e-NAM portal. This will help farmers get better market access, more buyers, traders and realise better prices for their produce

With the start of New Year 2019, e-National Agriculture Market (e-NAM) has achieved another milestone by commencing inter-state trade between mandis of two different states. Earlier trade used to happen either within the Agricultural Produce Market Committee (APMC) mandi or between two APMCs situated within same state. The very first inter-state transaction in tomatoes has been carried out between a trader in Bareilly e-NAM APMC of Uttar Pradesh and farmer of Haldwani e-NAM APMC of Uttarakhand. Similarly, the inter-state transactions in potatoes, brinjal and cauliflower have been carried out between the e-NAM mandis of booth states. In all the cases, e-payments have been made through e-NAM portal. This will help farmers get better market access, more buyers/ traders and realise better prices for their produce.
Highlighting about eNAM, Sanjay Agarwal, secretary, Department of Agriculture & Farmers’ Welfare (DA&FW) said, “e-NAM is not just a scheme but it’s a journey which aims to reach out to the last mile farmer and transform the way agricultural produce is sold.”
To facilitate inter-state trade between the e-NAM states, Union Ministry of Agriculture and Farmers’ Welfare conducted series of coordination meetings with concerned states and mandi officials. As a result of these interactions, both the states have now facilitated licensing of traders of each other for inter-state trade on e-NAM portal.
e-National Agriculture Market is a pan-India electronic trading (e-trading) portal which seeks to network the existing physical regulated wholesale markets, known as APMC markets, through a virtual platform to create a unified national market for agricultural commodities. e-NAM platform promotes better marketing opportunities for the farmers to sell their produce through online competitive and transparent price discovery system and online payment facility. It also promotes prices commensurate with quality of produce. The e-NAM portal provides single window services for all APMC related information and services. This includes commodity arrivals, quality and prices, buy and sell offers and e-payment settlement directly into farmers’ account, among other services.
This online trading platform aims at reducing transaction costs, bridging information asymmetry and helps in expanding the market access for farmers. So far, 585 regulated APMCs of 16 states and two union territories have been integrated to e-NAM platform. The government has also decided to integrate additional 415 markets by March, 2020.