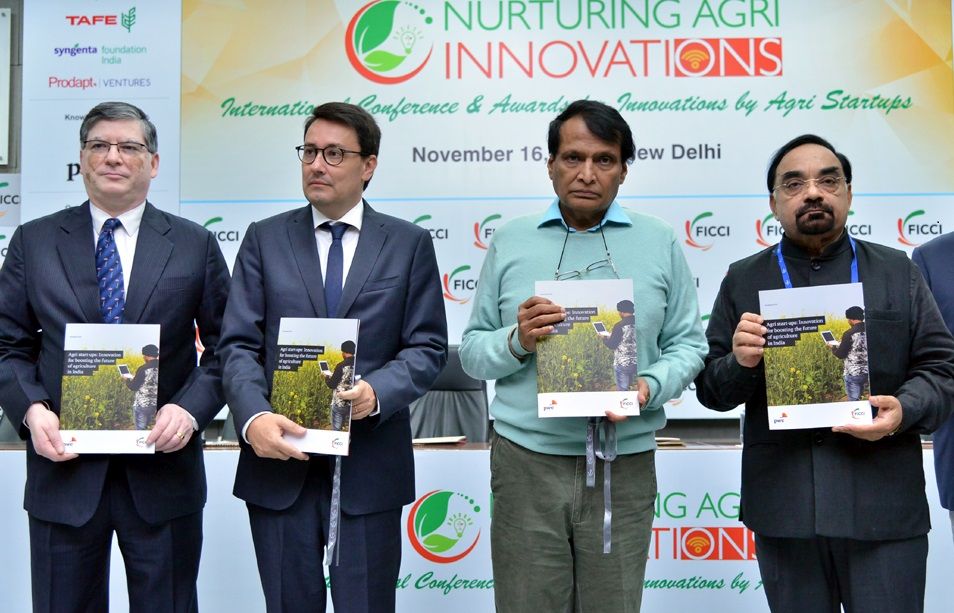 Suresh Prabhu, Minister of Commerce and Industry, Government of India today said that innovations and new ideas would be essential to overcome the challenges arising in the agriculture sector globally.
Speaking at the ‘International Conference & Awards for Innovations by Agri Start-ups’ organised by FICCI, Prabhu said, ”To promote new innovations and ideas, start-up companies in agriculture sector should be encouraged.” “We have to produce more but there is a threat to existing products and this is going to be an extremely important issue. Agri innovation is the most important innovation the world would need in the field of agriculture at various levels and in different forms”, he added.
He said, start-ups could use technology and bring innovations in areas such as making land and soil more fertile; producing agriculture from waste water; minimal use of fertilisers and pesticides and better productivity.
The Union Commerce Minister also released the FICCI-PwC Knowledge Report on ‘Agri-Start-ups: Innovations for boosting the Future of Agriculture in India’ and also gave away the  ‘Business Excellence Awards for Innovations by Agri Start-ups’.
Alexandre Ziegler, Ambassador of France to India, highlighted the strong relationship between India and France, especially in the agriculture sector. He said that France had already started using hi-end technologies like drones, artificial intelligence, big data among many other technologies to ensure increase the productivity and invited Indian companies to invest in France.
TR Kesavan, Chairman, FICCI National Agriculture Committee & President and COO, Tractors and Farm Equipment (TAFE) said, the areas such as farm to the farm head; farm at storages and storage to markets were crucial areas where agri start-ups can do innovations. It was imperative for start-ups to adopt sustainable business models to hep the farm sector.
Pravesh Sharma, Adviser- FICCI Agriculture Division and CEO, Kamatan Farm Tech stressed the need for creating an ecosystem for the sustainability of start-ups and emphasised the need for using disruptive technologies in the agriculture sector.
FICCI Business Excellence Awards for Agri Start-ups 2018

Following are the highlights of FICCI-PwC Report: Agri Start-ups: Innovations for boosting the future of Agriculture in India

The report notes that agri-start-ups need to customise suitably for wading into market that has scant technology adoption rate due to limited budgets and inconvenience with its usage and re-orient their methods of selling, which essentially will be different from urban India and start-ups operating there.