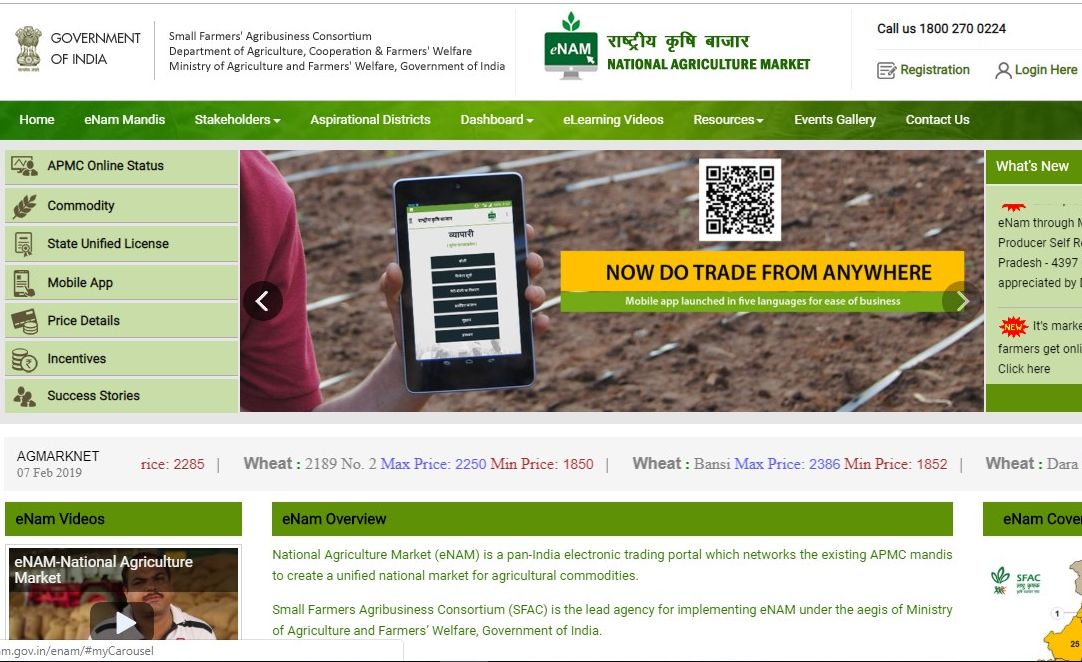 Interstate trade of agricultural produce in wholesale mandis through e-National Agriculture Market (e-NAM) platform is gathering pace with the latest transaction taking place at Madhya Pradesh’s Mandsaur e-NAM mandi, which sold coriander to Ramganj mandi of Rajasthan. Similarly, interstate transaction is taking place at Maharashtra’s Akola e-NAM mandi, which sold green gram to Nokha mandi of Rajasthan. Recently, the first Interstate transaction in tomatoes has been carried out between trader of Bareilly e-NAM APMC mandi of Uttar Pradesh and farmer of Haldwani e-NAM APMC of Uttarakhand, followed by similar trade in groundnut between farmers of Gadwal mandi in Telangana and Trader of Kurnool mandi in Andhra Pradesh.
Speaking on the development, Sanjay Agarwal, Secretary, Department of Agriculture and Farmers’ Welfare, Government of India said, “Interstate trade on eNAM achieves the objective of removing barriers of movement of agriculture produce between geographies; in doing so, increases income through appropriate monetisation of farmers’ produce.”
So far 21 e-NAM mandis of eight states namely Uttar Pradesh, Uttarakhand, Andhra Pradesh, Telangana, Rajasthan, Gujarat, Maharashtra and Madhya Pradesh have joined hands to start interstate trade on e-NAM. Apart from Uttarakhand and Uttar Pradesh, interstate trade also happened between Andhra Pradesh and Telangana, Rajasthan and Gujarat, Maharashtra and Rajasthan, Madhya Pradesh and Rajasthan.
The 136 interstate transactions and 14 commodities which include vegetables, pulses, cereals, oilseeds, spices among others have been traded under interstate trade through e-NAM platform in a short span of time. Rajasthan is the first state to start interstate trade with more than one state, establishing trade link with Gujarat, Maharashtra and Madhya Pradesh through e-NAM. Volume of interstate trade is also picking up as farmers and traders are gaining confidence in the system. Initially started with 25 commodities, e-trade facilities have been provided on 124 commodities with tradable parameters on e-NAM portal. Through interstate trade, farmers get better market access, more buyers and traders with better prices realisation for their produce. This online platform is expected to be a giant leap in reforming the agriculture market in India.
Initially, trade on e-NAM started inside the individual e-NAM mandi, with farmers and traders of that mandi. After persuasive efforts by the Government inter-mandi trade on e-NAM platform started within the state. Now inter-mandi trade within e-NAM states is happening in 196 mandis of 10 e-NAM states namely Andhra Pradesh, Chhattisgarh, Haryana, Himachal Pradesh, Jharkhand, Rajasthan, Telangana, Madhya Pradesh, Uttar Pradesh and Uttarakhand.
e-NAM or e-National Agriculture Market is a pan-India electronic trading (e-trading) portal which seeks to network the existing physical regulated wholesale market, known as APMC market, through a virtual platform to create a unified national market for agricultural commodities. e-NAM platform promotes better marketing opportunities for the farmers to sell their produce through online, competitive and transparent price discovery system and online payment facility. It also promotes prices commensurate with quality of produce.
The e-NAM portal provides a single window services for all APMC related information and services. This includes commodity arrivals, quality, prices, buy and sell offers and e-payment settlement directly into farmers’ account, among other services. Farmers can access the information on e-NAM easily through their mobile phones from anywhere. This online trading platform aims at reducing transaction costs, bridging information asymmetry and help in expanding the market access for farmers.