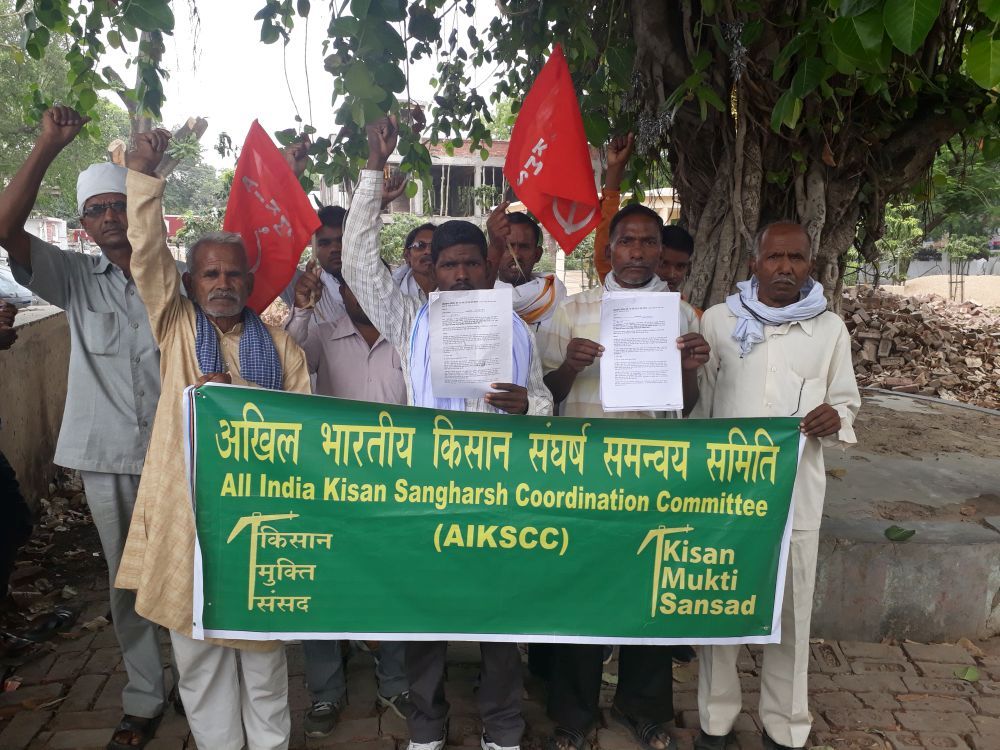 On the call of All India AIKSCC, peasant leaders in Allahabad and Kaushambi in Uttar Pradesh submitted a memorandum signed by hundreds of peasants to the District Magistrate

On the call of All India Kisan Sangharsh Coordination Committee (AIKSCC), peasant leaders in Allahabad and Kaushambi in Uttar Pradesh submitted two memorandums signed by hundreds of peasants to the District Magistrate for the Chairman Rajya Sabha and Speaker Lok Sabha. Through the memorandums, farmers are demanding for getting the private member bills on “Farmers’ Right to Guaranteed Remunerative Minimum Support Price (MSP) for Agricultural Commodities Bill 2018” and “Farmers Freedom from Indebtedness Bill 2018” passed immediately. The bills have been prepared after a campaign in rural areas and a Kisan Mukti Sansad by the AIKSCC, a front of over 194 farmer organisations in 22 states.
Main opposition parties and some NDA supporters have stamped their support to the bills on April 25, 2018.
The assured MSP bill obligates the government to regulate and decrease the cost price of farm inputs including diesel, seeds, fertilisers, insecticides, machinery and equipments, to set up a Cost and Prices Commission in order to assess all the cost of production which shall include computing of paid up costs, family labour, rent of land, depreciation of capital inputs, interest and insurance costs designated as C2 costs, and to ensure through public and private purchasing agencies that the farmers get a guaranteed Minimum Support Price of C2 + 50 percent.
The Debt bill obligates the government to waive all loans of all peasants, including landless peasants, agricultural workers, share croppers, fishermen which includes declaration of private loans as null and void and payment to the creditors by the government without any recovery from the debtors.
Today is the 160th anniversary of First War of Independence 1857 during which Indian peasants rose in armed revolt against indebtedness and lagan extraction by the British and Indian kings subservient to them.
At Allahabad Ashish Mital, ex-Registrar HC, Panchamlal, Heeralal, Suresh Nishad, Ramphal, Rakesh Patel, Dinesh Patel, Vinod, Bhagat, Shyambabu, Bachchilal, Ramasrey and others were present. Atul Singh ACM, accepted the memorandum. At Kaushambi Phulchand, Santram, Vishwanath, Krishna, Keshav and others were present.