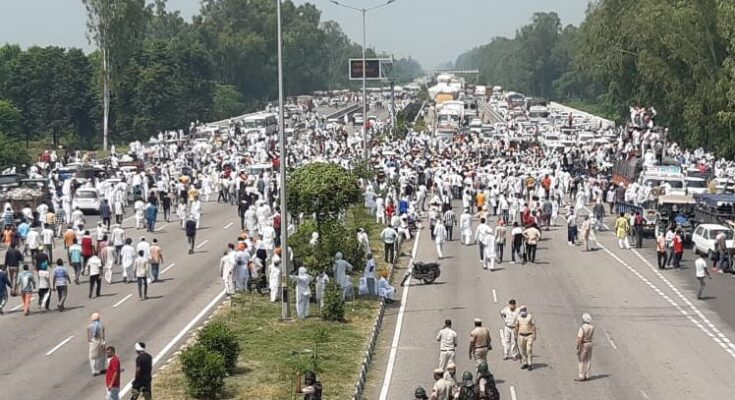 All India Kisan Sangharsh Coordination Committee shall lead a protest in Delhi on September 14, while millions farmers shall gherao Government offices in districts and sub-divisional headquarters

Working Group of All India Kisan Sangharsh Coordination Committee (AIKSCC) has launched a national farmers uprising against three Ordinances, Electricity Amendment Bill and exploitative hike in Diesel-Petrol Prices on August 9, this year. After an urgent consultation across the country with constituent organisations over the repression unleashed by Government of Haryana and Central government, AIKSCC told the government to withdraw the Ordinances and other “anti-farmer” measures or face a nationwide protest and mass resistance. The Haryana government blocked the farmers in Pipli, Kurukshetra and seven centres, house arrested and warned leaders, but the anger of the farmers cannot be contained by these acts of suppression, AIKSCC said.

AIKSCC shall lead a protest in Delhi on September 14, while millions farmers shall gherao Government offices in districts and sub-divisional headquarters. “Farmers of the country strongly disagree with the RSS vision of cheating the farmers to help the foreign exploiters, crying ‘aatmanirbharta’ and inviting MNCs and Indian corporate to loot the farmers,” the farmer organization said..

The three Ordinances issued are due to be converted into law in the Monsoon session of the parliament. The one on Essential Commodities removes all cereals, pulses, oilseeds, potato and onion from trade restrictions and price control. The second on Mandi Samitis allows unrestricted purchase of crop by companies, contractors and moneylenders directly from farmers. The third binds farmers to the corporate houses through contracts, forcing the farmer to buy costly inputs and to pledge crops to the company, without government security against cheating and manipulation. Corporates will buy from farmers at cheap rates and sell dear to consumers. The Ordinances are designed to save the crisis ridden big corporates and help them to squeeze profits from the ‘only’ sector, which Modi government says has had a 3.4 percent growth during first quarter of 2020-21, AIKSSC said in a statement.

According to AIKSSC, Modi government’s Power Bill will raise electricity tariff across the board to above Rs 10 per unit, enforce prepaid metres to harm all consumers including farmers, domestic and BJL consumers. The government has raised diesel and petrol prices by increasing central excise duty by Rs 28 and 24 per litre in six years. Total tax now is Rs 52 per litre, while crude prices have fallen from $ 106 to $ 40 per barrel.

Meanwhile, AIKSCC has written to all MPs and parties to get these “anti-farmer and pro-corporate” measures withdrawn.