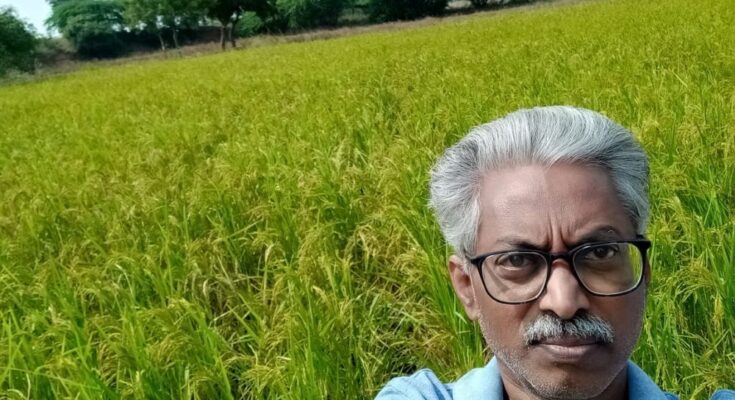 The Hyderabad based farmer experimented in a 250 acre alkaline soils at Raichur in Karnataka, and different acreages in Nellore and Vikarabad districts

Good crops are being yielded by converting Chowdu Bhoomi (alkaline soil) into fertile lands growing crops with good yields. MS Subrahmanyam Raju, a Hyderabad based farmer has conducted many experiments successfully and achieved good results. He has now become a role model to many as India has lakhs of acres of alkaline soils.

MS Subrahmanyam Raju along with a couple of other farmers carried out successful experiments at Raichur in Karnataka, Nellore district in Andhra Pradesh and Vikarabad district and its adjoining places in Telangana.

150 acres of Chowdu Bhoomi has been successfully converted at Raichur. They have cultivated organic crops with good yield and profits.

MS Subrahmanyam Raju besides being a giver of food he has become a giver of knowledge. Over the past few years, he has been the inspiration for many experiments and unique efforts to transform alkaline soils into agricultural lands. He wants to share his success with fellow farmers on the eve of Earth Day to be observed on April 22.

Raju founded HEART Trust along with others. It has been spreading awareness on things like these and many more such as health, environment, agriculture, rural development and tourism.

MS Subramanyam Raju describes alkaline soils, as the drylands which do not absorb water. The soil is stiff and compact and becomes hard. The plants growing here grow short of nutrients and are often prone to diseases. This can lead to low yields, dead plants when the soil is high in alkaline and seeds not getting germinated. Such lands are in lakhs of acres in our country and the state.

Alkaline soils are difficult to take into agricultural production, says Raju. And adds that due to the low infiltration capacity, rainwater stagnates on the soil easily and, in dry periods, cultivation is hardly possible without copious irrigated water and good drainage.

Such soil contains excessive amounts of sodium and calcium. The soil becomes less soluble and has trouble absorbing nutrients, or allowing its surrounding plant’s roots, to absorb nutrients.

The availability of many plant nutrients in soils, including iron, zinc, copper, and manganese, is reduced at high pH values. Iron chlorosis in plants, caused by inadequate iron, is a common problem in alkaline soils, says Raju.

As a result, farmers are suffering severely. Despite having so much land, farming is not profitable. He said that his main objective behind such experimentation was to create awareness among the people about land conservation, environmental protection and converting alkaline soil into cultivable lands.

On the one hand, pollution is on the rise, depleting resources are leaving a scar on human-inhabited land. He said that the time has come to save the planet from this misery and support human survival.

MS Subramanyam Raju decided to do whatever he could. Recognising the dangers of chemical farming in the alkaline soils in Raichur, Karnataka, organic farming was undertaken. With reduced costs and carried out experimental cultivation, he has achieved good results.

Raju has been living in Hyderabad for the last few years and has been conducting these experiments in several places in Karnataka, Andhra Pradesh and Telangana, cultivating crops and achieving high yields and instilling confidence in everyone.

Geologically, many changes have taken place on Earth from the Pleistocene epoch (two million years) to the present day, such as alkaline minerals like feldspar, feldezides, and mica, have been shown to increase the pH levels of the soil when they are depleted by the atmosphere and reduced to tiny particles. The higher the concentration of salts in the soil, the more likely it is to become barren.

Water availability and quality should be considered face to face as part of the alkaline control measure. For pH value of water 7, the concentration of salts in the water should be less than one or one.

According to Raju, some sachets can be sprayed to prevent nutritional deficiencies. They can be made at the farmers’ house at a very low cost. The material can be used in combination with fish amino acid, chicken egg amino acid, sugarcane, jaggery, soybean, sesame or ulava sprouts, buttermilk, and bacteria. It should be sprayed every fortnight.

There are millions of acres of drylands in India. Applying gypsum as a green manure by the method suggested by agronomists to convert these into crop-friendly ones is a long and laborious task. The farmer is more likely to lose out if the land is set too long to change. So the earth can be changed in a very short period with scientific methods, Raju says.

A new scientific approach to drylands

When given sulphur oxidising bacteria, elements such as sodium and calcium react with their ionic sulphur to form their sulphate and reduce the pH value. Similarly, hydroxides of those elements also form when reacted with water. In this way, the pH decreases. Ploughing every time the farmers give the bacteria, the soil in the bottom layers also comes up and the action is good and the results too are good.