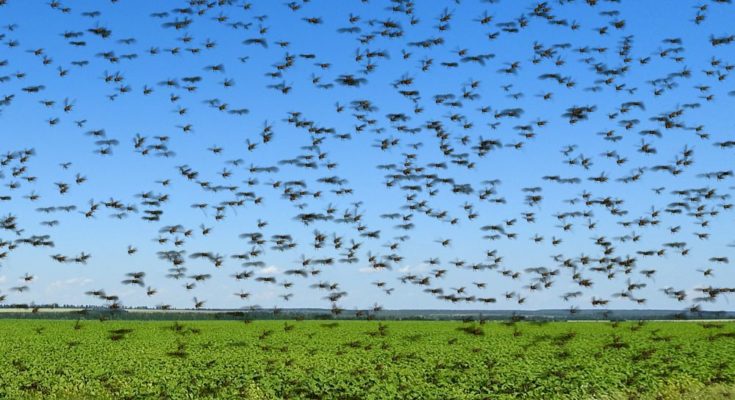 Presently the control work is in full swing with the cooperation and coordination of the state agricultural departments, local administration and Border Security Force

New Delhi: The locust control operation is in full swing mainly in Rajasthan, Gujarat, Punjab, Madhya Pradesh and Uttar Pradesh. As many as 62 spray equipments — 21 Micronair and 41 Ulvamast — are being used by Locust Circle Offices while 200 employees of Locust Warning Organization are deployed for conducting survey and control work. Control room has been established in all 10 Locust Circle Offices and also at LWO, Jodhpur. Even beyond the Scheduled Desert Area, temporary base camps are set up, at Jaipur, Ajmer, Dausa and Chittorgarh in Rajasthan; Shivpuri in Madhya Pradesh; and at Jhansi, Uttar Pradesh for effective control of desert locust, the Ministry of Agriculture & Farmers Welfare, Government of India has informed in a press statement.

According to the ministry, the control work is in full swing with the cooperation and coordination of the state agricultural departments, local administration and Border Security Force (BSF). Two locust swarms from Indo-Pak border areas are reported, one each in Bikaner and Sriganganagar districts. Control operation is going on against these swarms. At present, swarms of immature pink locusts with intermittent population of maturing yellow adults are active in Jaisalmer, Barmer, Jodhpur, Bikaner, Sri Ganganagar, Jaipur, Nagaur, and Ajmer districts of Rajasthan, Panna district of Madhya Pradesh and Lalitpur district of Uttar Pradesh.

Supply order for 60 additional sprayers is placed with Micron, UK. On May 22, 2020, a video conference meeting was organised with the Micron representatives from UK and Indian High Commission to discuss the details of the supply plan. Fifteen equipments have been received and deployed for locust control. The delivery of remaining equipment is also scheduled in due course, according to the ministry.

Government of India has also issued a supply order of 5 CD Atomizer kits with GPS trackers for aerial spray capabilities from this UK based company. The first two kits will be available in September 2020 and the remaining 3 kits are to be made after one month of their successful testing. These kits will be fitted into helicopters of the Indian Air Force and will be used for air operations for control of desert locusts, the press statement has mentioned.

For effective control of locusts in inaccessible areas and on top of tall trees, use of drones is being explored. An e-tender was invited to provide services of drones for aerial spraying of pesticides. The Ministry of Civil Aviation, Government of India has approved conditional exemption for locust control. An Empowered Committee has been constituted under the Chairmanship of Additional Secretary, Department of Agriculture & Farmers Welfare to assess and facilitate the possibility of aerial control capability as a locust control measure. On its recommendation, work order for engagement of drones has been issued to five companies on June 6, 2020. These companies have started work in Barmer, Jaisalmer, Phalodi, Bikaner and Nagaur areas and so far 12 drones have been deployed, according to the note.

Supply order has also been issued for purchase of 55 additional vehicles to strengthen the control capacity, 33 vehicles have been delivered and deployed in locust control operations. The situation is monitored constantly by higher authorities and needful is being done on priority basis. As on June 21, 2020, locust control has been undertaken in 114,026 hectare area in Rajasthan, Punjab, Gujarat, Uttar Pradesh, Maharashtra, Madhya Pradesh and Chhattisgarh, the Agriculture Ministry has further said.