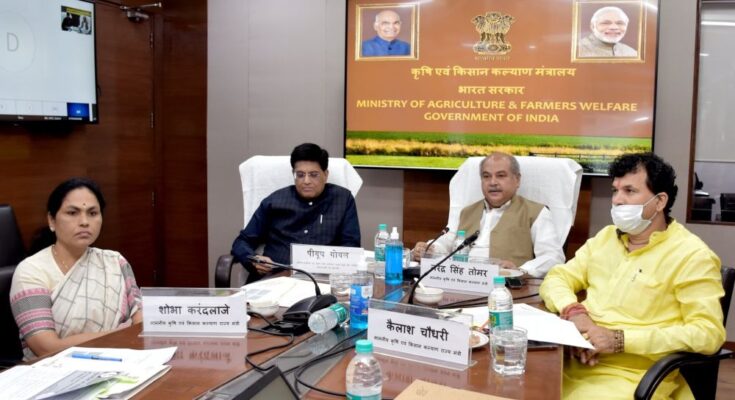 Union agriculture minister said that MoAFW had created database of 5.5 crore farmers and it would be increased to 8 crore farmers by December, 2021 with the help of state governments

Agriculture has to be linked with digital technology, scientific research and knowledge, stating this at the Chief Ministers’ conference on initiatives and schemes of Ministry of Agriculture and Farmers’ Welfare held via video conferencing today, Union Agriculture Minister Narendra Singh Tomar emphasised that the Central government and state governments must work together for agriculture to give a boost to the economy.

Talking about digital agriculture, the minister urged all states to study the Karnataka model which was presented during the conference. He said that MoAFW had created a database of 5.5 crore farmers and it would be increased to eight crore farmers by December, 2021 with the help of state governments. The minister said that with the establishment of Agriculture Infrastructure Fund, farmer producer organisations (FPOs), primary agricultural credit societies (PACS), agricultural mandis and start-ups would get loans easily. Talking about the Oil Palm Mission, the Minister said that ICAR had conducted a study on the areas in which oil palm cultivation could be expanded.

Union Minister for Commerce and Industry, Food, Public Distribution and Consumer Affairs and Textiles, PiyushGoyal said in his address that with an increase in agriculture exports, India was emerging as a trusted export partner and there was further scope for improvement of agri-exports. He emphasised that the infrastructure needs to be strengthened for storage and warehousing.

You may also like: All things you need to know about National Mission on Edible Oils – Oil Palm

The objectives of the conference were to highlight the salient features of Aatmanirbhar Krishi (self-reliant farming) and to enable states to enhance farmers’ income. It was also an occasion to share innovative initiatives undertaken by the states.

The discussion with the states centred around the Agriculture Infrastructure Fund set up to drive infrastructure investment. The recent modifications in the scheme were explained – the eligibility has been extended to agricultural produce market committees (APMCs), state agencies, national and state federations of cooperatives, FPOs and self-help groups (SHGs). The eligible activities were explained like community farming, assets, post-harvest management projects and primary processing. The need to make India self-reliant in edible oils and palms was stressed and the role of the states was discussed. Digital agriculture and use of emerging technology for smart agriculture was also discussed.

The concept of the farmers’ database was explained. A national farmer database is being created by taking data from existing schemes like Pradhan Mantri Kisan Samman Nidhi (PM-KISAN), soil health card and PM Fasal Bima Yojana (PMFBY). The database will have connectivity to state land records database. The Pradhan Mantri Kisan Samman Nidhi and the saturation of Kisan Credit Card (KCC) for small and marginal farmers were also discussed. Upgradation of the beneficiary database was emphasised. There was discussion on export of agriculture products and the role of APEDA (Agricultural and Processed Food Products Export Development Authority) in increasing agriculture exports. APEDA will facilitate cluster centric capacity building exercises for state officials, FPOs, farmers and start-ups.

The first day of the two-day conference saw the participation of chief ministers and agriculture ministers of around a dozen states.

Union Minister of States, Kailash Choudhary gave the vote of thanks. Secretary, MoAFW, Sanjay Agarwal gave the welcome address and moderated the conference. Minister of State for Agriculture, Shobha Karandlaje; Secretary MoF&PD, Sudhanshu Pandey were also present. Additional Secretary, MoAFW, Vivek Agarwal gave a presentation on the agenda points of the conference.  Chairman, APEDA gave a presentation on agri exports. Other senior officials from Central and state governments also participated in the conference.