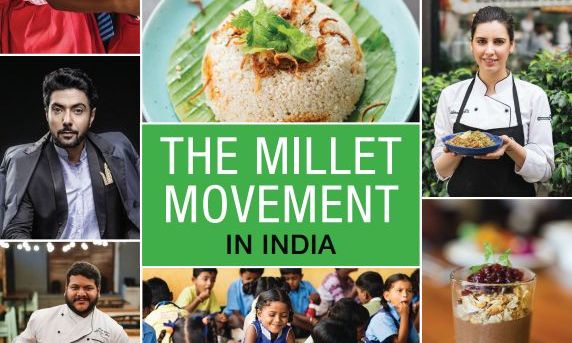 ‘The Millet Movement in India’, the first coffee table book about the increasingly popular grain just published by Penguin Random House India, has hit the stores. “I am confident the coffee table book will provide valuable insights into our cultural culinary landscape and help increase awareness about our ancient wisdom of food processing,” Prime Minister Narendra Modi said about the book.

The book brings to fore the chefs who are giving millets the traditional to a modern makeover, farmers who are keeping traditions alive, entrepreneurs who take millet foods to the consumer in umpteen ways every day and the traditions that underpin all.  The book also makes a clear case for consuming millets to overcome anaemia and promote healthy growth in children by presenting scientific evidence, from various studies, including from the first school feeding study with millets, undertaken by the International Crops Research Institute for the Semi-Arid Tropics (ICRISAT) and Akshaya Patra.

One of the authors and former Assistant Director-General of ICRISAT, Joanna Kane-Potaka, said, “As 2023, the International Year of Millets, approaches, this book is a timely read for everyone from the consumer to the chef and from the farmer to the policymaker.”

You may also like to read: Study shows regular millet consumption can combat anaemia

The book shows a consumer numerous ways to tastefully cook millets with a recipe section from some of India’s top chefs like Ranveer Brar, Sanjeev Kapoor, Anahita Dhondy and Saransh Goila. The millet recipes range from traditional dishes like idlis, biryani and laddoos to modern dishes like burgers and waffles.

Prof. Ramesh Chand, Member, NITI Aayog, Government of India, noted in the book, “Millets are indeed superior cereals in terms of nutrition and resilience and also in terms of sustainability. They are ideally suited to address child undernutrition and fit very well in nature-friendly production. Use of millets in various nutrition intervention programmes and in Public Distribution System will be of great help to address malnutrition and improve the health of low-income households.”

“Millets are an opportunity right at our doorstep to create new exciting products and markets. If we want to tackle climate change, environmental degradation, malnutrition and farmers’ resilience, millets have to be part of the solution,” emphasised Dr. Jacqueline Hughes, Director General, ICRISAT.

The book is also supported by the ICAR-Indian Institute of Millets Research (IIMR). The Director of IIMR, Dr. Vilas Tonapi, noted, “India has the largest biodiversity of millets in the world as well as the largest range of millet products. We can leverage this to become a global leader in millets.”

ICRISAT, ICAR-IIMR and the National Institute of Nutrition (NIN) are some of the key organisations leading this cause with scientific backing. The recent scientific case for consuming millets has been made through a series of studies led by ICRISAT along with NIN and others which have established that regular consumption can help lower the risk of diabetes and obesity while improving cholesterol levels and contributing to a lowered risk of cardiovascular disease. The research effort had also demonstrated the effectiveness of millets in combating iron-deficiency anaemia and deficiencies of calcium.