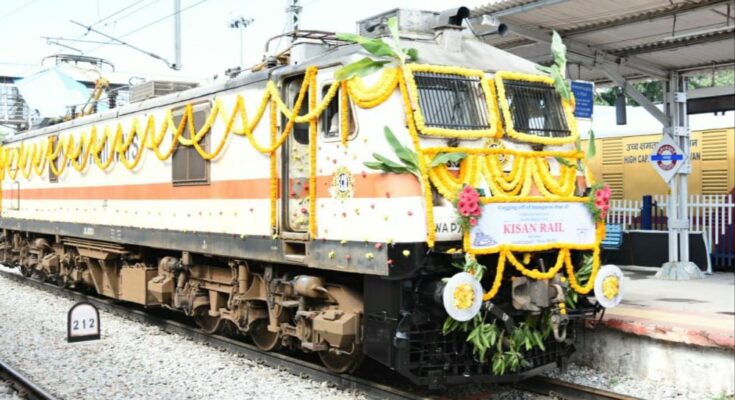 The Kisan train will run between Anantapur in Guntakal division of South Central Railway and Adarsh Nagar in Delhi. Speaking on the occasion, Narendra Singh Tomar said that the Kisan Rail would help in strengthening the agricultural economy, while Jagan Mohan Reddy said that the state’s popular fruits would now be able to reach other areas in the country easily.

Speaking on the occasion, Tomar, efforts have been made in every budget to make provisions for strengthening the agricultural economy and doubling of farmers’ income, which are now beginning to bear fruit. Kisan Rail and Kisan Udaan had been announced in this year’s budget so that farm produce is able to be transported all over the country in less time. On August 7, the first Kisan Rail was flagged off between Devlali in Maharashtra and Danapur in Bihar as a weekly service, which was later made bi-weekly due to increasing demand. Now the 2nd Kisan Rail will benefit farmers of the states coming en route.

The Union Agriculture Minister expressed appreciation about the implementation of the new agriculture ordinances and the Rs 1 lakh crore Agriculture Infrastructure Fund in Andhra Pradesh. He said that in Anantapur fruits and vegetables were being grown in more than two lakh hectare area, and the Kisan Rail would prove very beneficial to farmers of this region. Kisan Udaan service would also be started soon.

Andhra Pradesh Chief Minister YS Jagan Mohan Reddy said, horticulture is an important activity in the state. AP has 1st rank in the country in the production of tomatoes, coconut, papaya and chillies and is the biggest fruit producing state in South India. During the COVID situation, transportation of this horticultural produce to North India had become difficult. A number of special trains were run from Anantapur to Mumbai during the lockdown so that the horticultural produce could reach other parts of the country.

Minister of State for Railways, Suresh C. Angadi said that Kisan Rail is being started to help in the speedy transportation of farm produce to distant places, in keeping with the goal of doubling farmers’ income. Farmers can now sell their produce wherever they get better price without spoilage due to reduction in transportation time. This facility will also help in increasing agricultural exports.

Brief about Anantapur – New Delhi Kisan Rail
The Kisan Rail is conceptualised to provide priority to the farming sector and facilitate transportation of perishable agricultural products to various market places across the country. India’s second and South India’s first Kisan Train commenced its inaugural run from Anantapur in Andhra Pradesh to Adarsh Nagar in New Delhi today. Anantapur is fast becoming the Fruit Bowl of Andhra Pradesh. More than 80 percent of the 58 lakh MT of fruits and vegetables in the district is marketed out of the state, particularly to the north Indian states of Delhi, Uttar Pradesh, Punjab, Haryana among others. A major portion of the fruits and vegetables produced in Anantapur are transported out of the state. Earlier this was being transported by roadways. Starting a Kisan Rail will be particularly helpful in benefitting the small farmers and traders in marketing their product across the country in a safe, economical and speedy manner.

Kisan Rail service between Anantapur – New Delhi will cover a distance of 2,150 kms in 40 hours. The rake is loaded with 14 parcel vans – 04 vans load meant for Nagpur and another 10 vans load for Adarsh Nagar – totalling 332 tonnes. The inaugural Kisan Rail is loaded with tomato, bananas, sweet orange, papaya, musk-melons and mangoes. It caters to the requirements of small farmers and traders for transportation of their perishable produces such as fruits and vegetables. It will take less time and cost in comparison of road transport ensuring less damage to the farm produce while transportation.