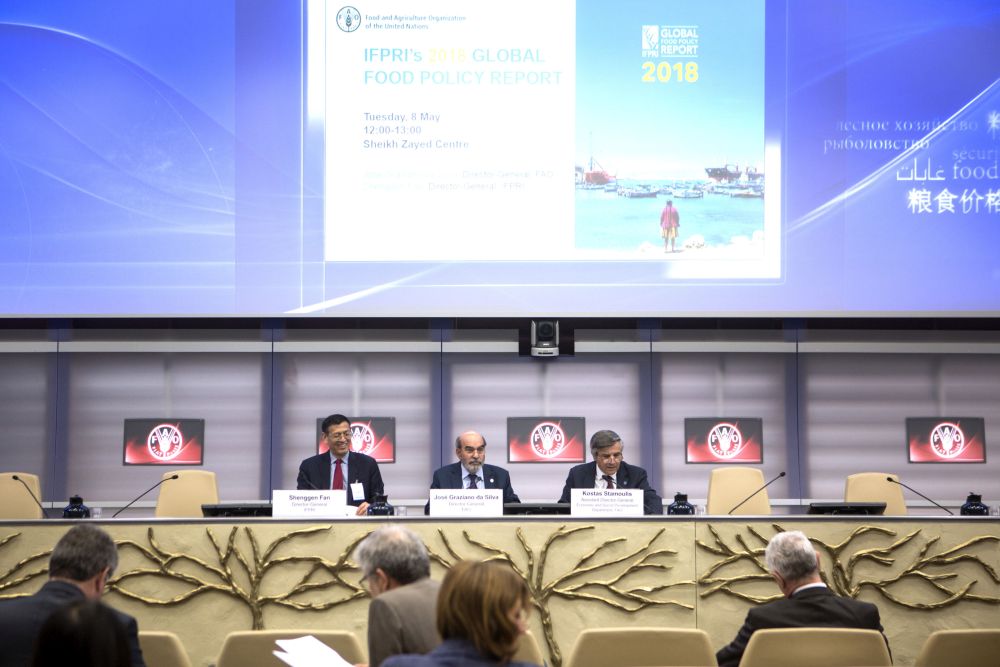 Global food trade is essential for all countries, but the world’s trade and regulation rulebook needs to be rebooted with an eye to bolstering trade in food that is healthy and nutritious rather than simply cheap, José Graziano da Silva, Director-General, Food and Agriculture Organization of the United Nations (FAO) said in Rome today.
The FAO Director General was speaking at the Rome presentation of the 2018 Global Food Policy Report, published by the International Food Policy Research Institute (IFPRI). This year’s edition is focused on how to rein in growing discontent with globalisation.
Facilitating the export of commodities to feed the world was a postwar imperative whose relevance has changed as “commodities became a synonym of industrialised processed food” and the threat of obesity is looming as large as that of hunger, he said. “Now things are changing completely.”
The popular farm-to-fork model of the food chain does not capture the complex realities of food systems, he said. “Most of the important things we do is beyond the fork.”
Food’s regulatory landscape, comprising laws, standards, production protocols, subsidies and disclosure protocols, should be redesigned “to protect healthy food and not food in general,” Graziano da Silva said. “Promoting healthy food is part of FAO’s mandate and I would even call it an obligation.”
“We need trade, as all countries, with no exception, need to exchange products to feed their population. The question is what kind of exchange,” Graziano da Silva said.
Noting a proliferation of trading tensions regarding fresh produce in particular, he suggested that it was archaic to “apply the same regulation on a product export from Brazil to Japan to something that is produced nearby to be sold in a farmers’ market in the same city.”
As a result, mass-produced processed foods, often full of extra saturated fats, salt and sugar, are actually advantaged by current rules.
“To assure that future food systems will provide healthy food for all people we’ll need a big change,” Graziano da Silva said, noting that this would entail much work by standard-setting bodies such as Codex Alimentarius. “We’ll need to think big if we really want to make this change.”
“We must go beyond production,” Shenggen Fan, Director-General of IFPRI, noting that key challenges in the pledge to end hunger include nutrition, employment, migration and the open sharing of knowledge and data.
IFPRI report
Trade has an essential role to play in pursuing the global goals of eradicating hunger, said IFPRI’s Fan.
International trade increases food availability and can help increase food diversity, as when tropical fruits are sent to temperate-zone countries during the winter and cereals are sent the other direction, he noted.
Over the last 40 years, the worldwide share of food calories crossing international borders rose from about 12 percent to more than 19 percent, according to the report.
Trade in food affects matters beyond calories and consumption. Fan cited the example of China’s “virtual water” imports through food imports from Brazil, Canada and the United States, without which China’s own aquifers and rivers might be depleted.
To make sure trade’s positives outweigh potential negatives, it is important to create an environment that is inclusive, particularly for the world’s smallholders, he said.
From left: IFPRI’s Shenggen Fan, FAO’s José Graziano da Silva and FAO Assistant Director-General Kostas Stamoulis during presenting the IFPRI’s 2018 Global Food Policy Report