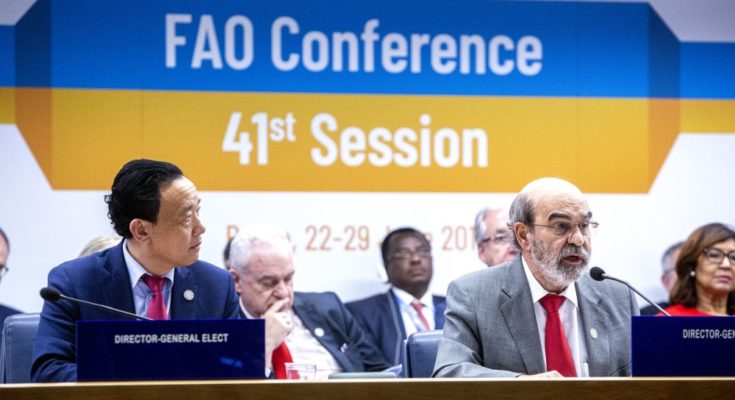 Many of the major issues related to healthy food systems, sustainable agriculture development and responsible environmental stewardship can only be addressed through joint work between countries and relevant partners, FAO DG said

There is a growing realisation that food and agriculture must play a vital part in reaching the Sustainable Development Goals (SDGs) and that in this context, FAO (Food and Agriculture Organization of the United Nations ) provides a neutral forum to address global issues of transboundary dimensions, the UN agency’s Director-General, José Graziano da Silva said today.

He made the remarks to the representatives of member states at the closing of the 41st session of the FAO Conference at FAO headquarters in Rome.

“In a world in which tensions between nations or ideologies undermine progress towards a better future, your work during this Conference has helped make FAO more effective in responding to the many demands on its services,” Graziano da Silva said noting that the Conference saw the highest number of participation – with over 1,300 delegates from 196 countries.

“Many of the major issues related to healthy food systems, sustainable agricultural development and responsible environmental stewardship can only be addressed through joint work between countries and relevant partners,” Graziano da Silva added.

The FAO chief extended a “very warm welcome” to the FAO Director-General elect Qu Dongyu of China and his team. Qu Dongyu will start his four-year term on August 1.

Calling government to combat unhealthy diets
Graziano da Silva reiterated his call for governments to encourage the production and consumption of healthy, locally produced foods to address the growing issue of obesity and overweight.

To support this, he put forward measures such as the introduction of taxes on unhealthy food products as well as easier-to-understand and more comprehensive food labels.

He pointed out that conventional policies aimed at keeping food prices low for consumers are contributing to perpetuate rural poverty, drive internal and external migration and contribute to unhealthy eating.

In closing, the Director-General thanked the member states and staff for their support during his tenure, and he expressed his satisfaction that Brazil’s pioneering Zero Hunger programme is being replicated by many countries and could be further expanded.

Summary of events at the 41st session of the FAO Conference
The Conference approved the Programme of Work and Budget for the biennium 2020-21, which is closely aligned with the 2030 Agenda and the Sustainable Development Goals.

The conference saw the election of FAO’s new Director-General – Qu Dongyu – on 23 June.

A series of side-events explored the challenges and opportunities of reaching Zero Hunger across several regions – Africa, Asia and the Pacific, Central America and the Caribbean, Europe and Central Asia, the Near East and North Africa – as well as on biodiversity for food and agriculture, youth’s role in agriculture.

Government ministries in Pakistan and Rwanda, a group of Spanish journalists, a Norwegian research vessel, a group of current and former parliamentarians in Chile, and FAO field staff who worked in South Sudan and Yemen were recognised at the biannual FAO Awards ceremony, held on the sidelines of the Conference.

On the first day of the conference, Graça Machel delivered McDougall Lecture with an impassionate call for a disruption across the whole agricultural sector and a “game changer in agriculture” if countries are to reach the Zero Hunger goal by 2030, the target date agreed by the international community.