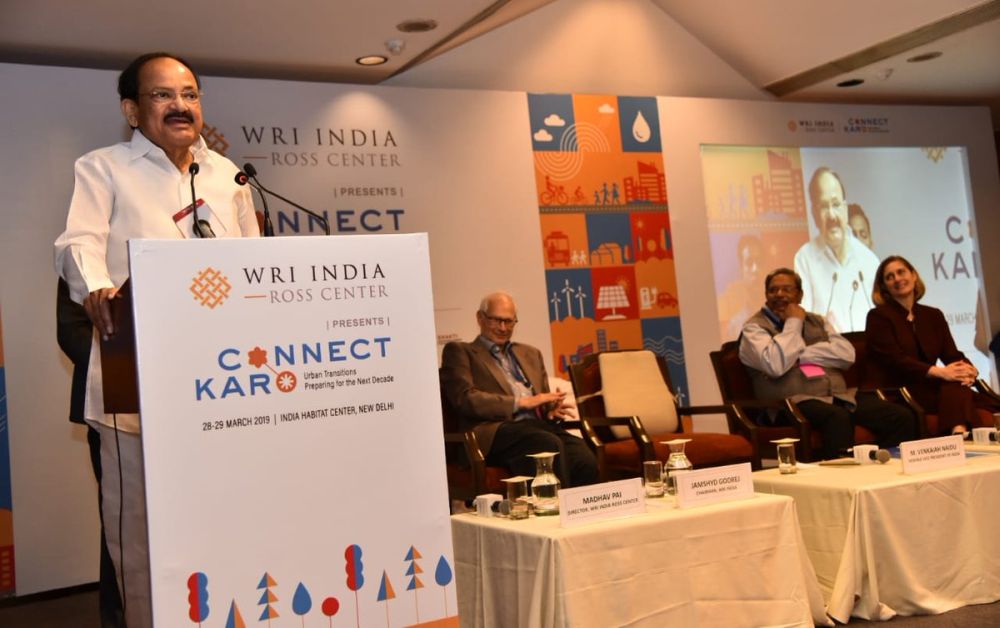 The Vice President of India, M. Venkaiah Naidu has said that farmers were critical for the well-being of the nation and they play a huge role in ensuring and maintaining home grown food security in India. He was delivering the keynote address at the annual event ‘Connect Karo’, organised by the WRI India, in New Delhi today.
The Vice President stressed upon the need to take steps to make agriculture more remunerative and sustainable. In order to increase farmer’s income, we have to enhance their access to markets and equip them to produce adequate quantity of nutritious food to ensure home grown food security, he added.
Naidu called for efforts from scientists, agriculturalists and the policy makers to see that land resources were used efficiently by reducing intensity of harnessing vital natural resources like land and water for producing per unit of nutrition. Constructive debate must take place on the rise and impact of population and its growth based on the availability of resources and its impact on environment, he added.
The Vice President said that collective actions were needed to correct development strategies to include preservation of nature. Talking about the serious impacts of climate change, he opined that it was necessary that government, people and the private sector join hands to restore the balance that had wittingly and unwittingly disturbed.
The Vice President said that climate change was the most common challenge faced by the world and said that the best way to face the challenges of climate change was to be friendly with nature and live in harmony with it. Nature culture together for better future, he added.
Opining that everybody has stakes in the survival of the civilisation, Naidu called for constructive people’s movement on initiatives such as tree plantations, keeping surroundings neat and clean, educating the women and girl child, changing lifestyles to avoid the disease burden and others to correct the maladies in our society and to make our civilisation environmentally sustainable. School children must be taught about the importance protecting and preserving the nature right from their school days, he added.
The Vice President said that increase in urbanisation, cutting of forests, rise in energy consumption by way of increased use of cars, electricity, and others have led to indiscriminate use of resources across the globe and accelerated climate change. To arrest such trends, he advised for judicious and sensible use of natural resources and consciously adopt a low carbon growth path, without compromising on our economic development.
Naidu said that in the Indian context, the cultural traditions of worshipping nature can provide additional inspiration for concrete and accelerated action. We should love and live with nature and preserve nature and culture for a better future, he added.
Saying that India’s commitment towards renewable energy sources had led to the setting up of the International Solar Alliance, the Vice President said that the sector has the potential to create new jobs for men and women across India, contributing to the overall GDP of the country even as we find solutions for complex problems of clean energy. He also called for the urgent need to take systematic measures to improve air quality as it adversely impact the health and well-being of city residents, especially our children.