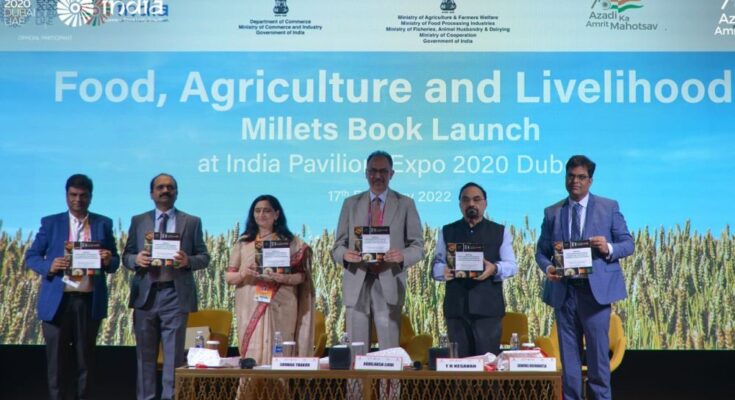 The primary purpose of India’s participation at Expo2020 is to benefit the small and marginal farmers who need economies of scale, collectivisation, and more forums to come together

As part of India’s efforts to showcase the country’s investment-friendly policies and growth opportunities in agriculture and allied sectors at EXPO2020 Dubai, Dr Abhilaksh Likhi, Additional Secretary, Ministry of Agriculture & Farmers Welfare, invited the startups and farmer producer organisations (FPOs) to submit their proposals to the ministry, and assured them that they would be considered for providing equity grants, management costs, and other available support measures.

Dr. Likhi was speaking at the inauguration of ‘Food, Agriculture and livelihood’ fortnight at the India Pavilion in EXPO2020 Dubai.

The ‘Food, Agriculture and Livelihood’ fortnight (February 17th – March 2nd) will comprise various sessions which will be presided over by representatives from the Ministry of Agriculture & Farmers Welfare; Ministry of Fisheries, Animal Husbandry & Dairying and Ministry of Cooperation. In addition, an array of activities has been planned during the fortnight under the key themes of millets, food processing, horticulture, dairy, fisheries, and organic farming and the vast investment opportunities these sectors offer.

Highlighting the opportunities, Dr. Likhi said, “The primary purpose of our participation at Expo2020 Dubai is to benefit the small and marginal farmers who need economies of scale, collectivisation, and more forums to come together, create synergies connect with markets both domestic and international.”

You may also like to read: Exports of agri and processed food products through APEDA reach $20.67 billion in 2020-21

Speaking on the occasion, Shubha Thakur, Joint Secretary, Ministry of Agriculture and Farmers Welfare, Government of India said, “Indian farmers produce food that not only sustains India but also provides food security to the world.” On the theme for the first week of the fortnight, that is, millets, she said, “Millets is an important area for us, and we would like to utilise this global platform to learn about the health and nutritional aspects of millets and bring back the glory of millets.”

India produces all the nine commonly known millets and is the largest producer and second-largest exporter of millets globally. The UN General Assembly recently adopted a resolution sponsored by India and supported by more than 70 countries, declaring the year 2023 as the International Year of Millets.

During the launch of the ‘Millet’ theme as part of the ‘Food, Agriculture and Livelihood’ fortnight at the sector floor at the India Pavilion, the delegation led by Dr Likhi unveiled the millet book comprising nutritious and delightful recipes made using millets. The delegation also launched the first ‘Millet Food Festival’, during which the visitors will get to relish the healthy and nutritious delicacies prepared using the millets.

Agriculture and allied sector is the backbone of the Indian economy and accounts for about 19 per cent of India’s total exports. As per the second advance estimate released by the Ministry of Agriculture & Farmers’ Welfare on Wednesday, record foodgrains production of 316.06 million tonnes is estimated for the 2021-22 crop year (July-June).