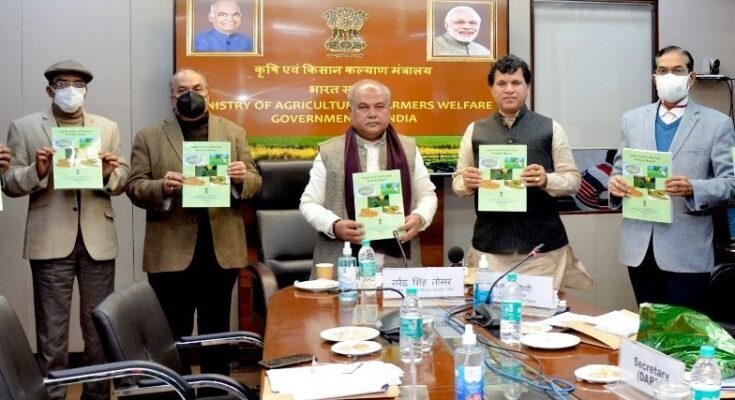 Addressing the National Conference on Agriculture for Summer Campaign 2021-22 today through video-conferencing, Union Agriculture Minister, Narendra Kumar Tomar said that summer crops not only provide extra income but also create employment opportunities in between Rabi and Kharif for the farmers thereby increasing crop intensity. The Government has taken new initiatives through various programmes for the cultivation of summer crops such as pulses, coarse cereals, nutri-cereals, and oilseeds. Though more than half of the cultivated area in summer season is under pulses, oilseeds and nutri-cereals, the farmers with irrigation sources are growing rice and vegetables during the summer season. He highlighted that area under cultivation of zaid crops including rice has increased progressively 2.7 times from 29.71 lakh hectares in 2017-18 to 80.46 lakh hectares in 2020-21.

The objective of Zaid conference is to review and assess the crop performance during the preceding crop seasons and fix crop-wise targets for the summer season in consultation with State governments. The minister assured full support to ensure supply of critical inputs and facilitate the adoption of innovative technologies with a view to enhance production and productivity of the crops. The priority of the government is to increase the production of oilseeds and pulses where large imports are required.

Speaking on the new varieties developed by Indian Council of Agricultural Research (ICAR), Tomar said that states should use new varieties of seeds for better production of summer crops. The minister also asked the states to plan in advance for their fertilisers needs and provide estimates to the Centre so that the fertiliser department can provide sufficient fertilisers timely. He also suggested that states should increase the use of NPK and liquid urea and reduce the dependence on DAP fertilisers.

You may also like to read; Union Budget 2022: Agriculture Sector Seeks Rational Reforms

Regarding training to the farmers, agriculture minister asked Krishi Vigyan Kendras (KVK) and Agricultural Technology Management Agency (ATMA) to jointly conduct the essential training for the small and marginal farmers so that new technology and knowledge reach the grassroot level.

In spite of difficult time due to Covid, India produced 3,086.47 lakh tonnes of foodgrains during 2020-21 (4th Advance Estimates). Pulses and oilseed production has also achieved an all-time high at 257.19 and 361.01 lakh tonnes, respectively. Production of cotton is being estimated at 353.84 lakh bales with which India is set to rise to the first position in the world. On the production and productivity fronts, the horticulture sector has also outperformed conventional foodgrain crops.

Addressing the conference, Kailash Choudhary, MoS for Agriculture and Farmers Welfare told the states that special focus is now given to increase production of oilseeds and pulses and make the country self-reliant. Regarding the promotion of organic and natural farming, Choudhary advised the states to send proposals to certify the entire block or area as organic/natural farming block so that farmers who belong to that area need not apply for certificates individually. He also asked the states to provide a market for organic farmers.

You may also like to read; Union Budget 2022-23: 9 Steps that can bring in decisive transformation and win back India’s farmers

Secretary (Agriculture), Sanjay Agarwal and other senior officers from DA&FW, ICAR and officers of different state governments participated in the conference through video conferencing. An interaction session was also organised with Agriculture Production Commissioners and Principal Secretaries of all the states in four groups to share the achievements, challenges and strategies to be adopted in respective states for increasing area coverage, production and productivity during summer/Zaid season in agriculture.