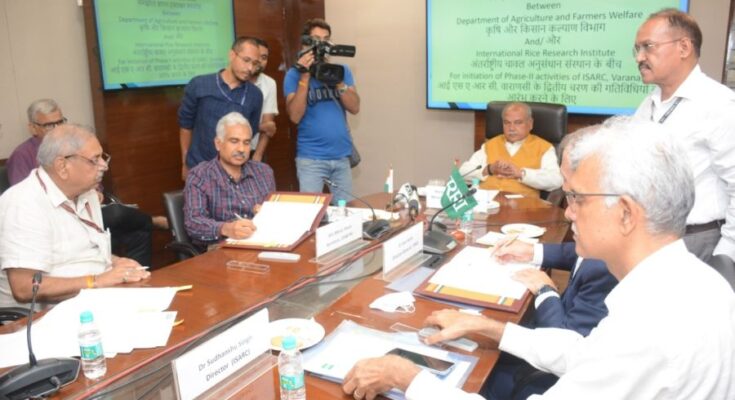 In order to commence the phase -2 activities of IRRI South Asia Regional Centre (ISARC) to scale up the existing partnership for food and nutrition security in the South Asian region, Department of Agriculture & Farmer Welfare (DA&FW), Government of India and International Rice Research Institute (IRRI) signed a memorandum of agreement (MoA) in New Delhi on Tuesday. The agreement was signed by Manoj Ahuja, Secretary, DA&FW and Dr. Jean Balié, Director General, IRRI in the presence of the Union Minister of Agriculture and Farmers Welfare, Narendra Singh Tomar.

The ISARC was established following a union cabinet approval five years ago. ISARC also set up a Centre of Excellence in Rice Value Addition (CERVA) that includes a modern and sophisticated laboratory with capacity to determine quality and status of heavy metals in grain and straw. One of the critical achievements of CERVA is the development of one low and one intermediate glycaemic index (GI) rice varieties: IRRI 147 (GI 55) and IRRI 162 (GI 57), respectively, through the joint efforts of the CERVA team and IRRI HQ. Since most rice varieties are high in GI and most of the Indians consume rice, the popularisation of low GI rice varieties will reduce or even reverse India’s increasing trend of diabetes.

Prime Minister Narendra Modi had inaugurated state-of-the-art Speed Breeding Facility (SpeedBreed) at ISRAC in Varanasi on December 23, 2021. The facility is devoted to expedite the plant growth cycle of crops and enable advancing rice plants for five generations per year against only one to two under normal conditions. This plays a crucial role in transferring important traits (e.g., low GI, biotic and abiotic stresses) to popular Indian rice varieties in a shorter time.

You may also like to read: FMC India collaborates with PAU for Science Leaders Scholarship Program

In his brief remarks, Ahuja said the agreement would pave the way for undertaking further work towards the improvement of the welfare of farmers and ensuring food and nutrition security in India and the rest of South Asia. IRRI, especially ISARC, has long been an ally of the Indian government in addressing the most pressing issues concerning the agri-food sector, he said.

Speaking on the occasion, Dr. Balié said the ISARC is the first and biggest research centre of the IRRI across the world outside Philippines. He said the continuation of the agreement will help the capacity of rice-growing countries in South Asia, including India, and Africa in crop production, seed quality, and to enhance farmers’ income. It will also mitigate environmental and climate change challenges in rice cultivation, help fight global hunger and eradicate poverty, he added.

Activities toward meeting the objectives of the 2nd phase will be carried out through a trans disciplinary approach and leveraging cutting-edge technologies in three thematic areas over 5 years viz., (1) Centre of Excellence in Rice Value Addition (CERVA); (2) Centre of Excellence in Sustainable Agriculture (CESA) and (3) Centre for Education in Innovation and Research for Development (CEIRD).

Major objectives of the agreement

You may also like to read: India to include agriculture curriculum in school education

The Phase II activities follow the long-time cooperation between the Government of India and IRRI. In 2017, the union cabinet chaired by Prime Minister Narendra Modi approved the establishment of ISARC at the campus of the National Seed Research and Training Centre (NSRTC) in Varanasi. The Cabinet, in its meeting held on July 12, 2017, had approved the establishment of the ISARC and the operation of IRRI in India. Subsequently, the memorandum of agreement was signed on August 2, 2017 between the DA&FW and IRRI.  The agreement was for 5 years from 2017-22 with a provision to extend for another 5 years subject to both sides mutually agreeing for the same. 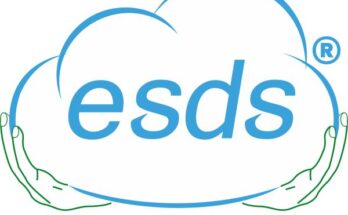 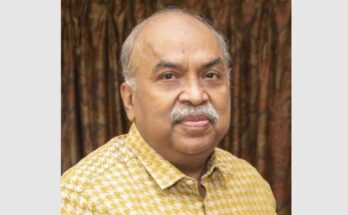 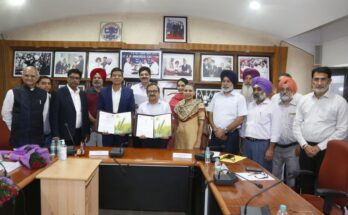